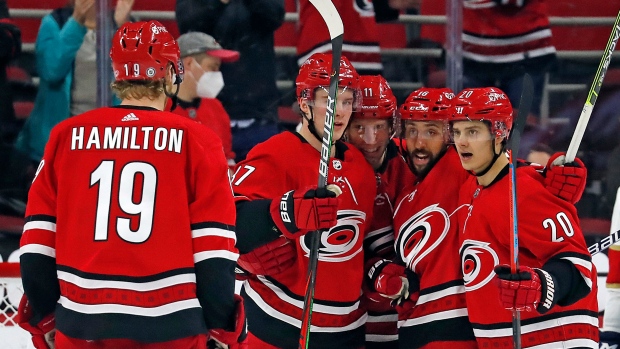 RALEIGH, N.C. — Jordan Staal scored twice, and the Carolina Hurricanes rallied with four goals in the third period to beat the Florida Panthers 5-2 on Tuesday night.

Vincent Trocheck scored a power-play goal against his former team and assisted on Dougie Hamilton’s tying goal early in the third, also on the power play. Jesper Fast had a late goal for Carolina, and Sebastian Aho had three assists.

The Hurricanes won for the first time this season when trailing after two periods, improving to 1-4-0 in those games.

“We had to be better (in the third period),” Staal said. “We were fortunate enough to find a way to get two points.”

Aleksander Barkov scored both goals for the Panthers, whose six-game winning streak — the longest active run in the league — was snapped. The Panthers had been 18-0-1 when leading after two periods.

“Just to be positive going into the third period,” Trocheck said of the Hurricanes' approach. “It was a good game. They’re a good team, so we couldn’t get down on ourselves for being in the position we were in.”

Florida was ahead 2-1 heading into the third in this one, but Hamilton tied it 45 seconds into the period on a wrist shot through traffic from inside the blueline.

“At 2-2, we were still in a pretty good spot there,” Panthers coach Joel Quenneville said. “It could have gone either way.”

Perhaps the tone had been set in Carolina’s favour for the final period by converting on the power play.

Staal put the Hurricanes ahead with 11:08 remaining when the puck trickled past Florida goalie Sergei Bobrovsky. He later added an empty-netter with 1:40 to play.

“I try to shoot as hard as I can,” Staal said of his first goal. “I had a good bounce there.”

“They’re a good team with the lead,” Quenneville said. “They got it and they basically look to shut you down. That was part of it.”

Petr Mrazek, in his second game back after a thumb injury that sidelined him for more than two months, made 34 saves for Carolina. Bobrovsky stopped 31 shots.

It was the first time in nine games that the Panthers surrendered more than three goals.

Trocheck has four goals in five games against his former team this season.

“I don’t think there’s any secret,” Trocheck said. “It’s just luck of the draw, I guess. I’ve got some greasy ones against them this year.”

The centre was acquired by the Hurricanes in a February 2020 trade with Florida.

Barkov has scored three goals since returning to the lineup for three games following an injury. He has eight goals in his last nine games.

“He’s skating well. That line is dangerous,” Quenneville said. “They all complement each other.”

The Panthers are going to need production from Barkov across the final weeks of the season in the tight Central Division.

“He just adds a whole new dimension to our team the way he plays,” Panthers defenceman Anton Stralman said.

Quenneville said it was his decision to hold out defenceman Keith Yandle in the third period.

Yandle, who was on the ice less than 6 minutes, holds the longest active streak in the NHL by playing in 906 consecutive games. That’s the third-longest string in league history.