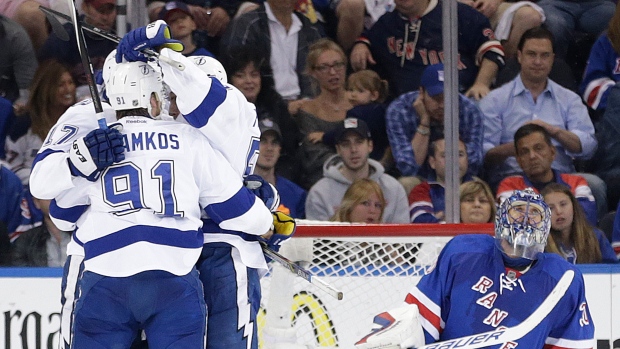 Lightning celebrate in front of Lundqvist , The Canadian Press

NEW YORK, N.Y. - Scoring goals made the Tampa Bay Lightning one of the NHL's most entertaining teams this season. Playing defence for the first time in three games has them within a victory of the Stanley Cup finals for the second time in franchise history.

Steven Stamkos set up Valtteri Filppula's go-ahead goal and scored another and the Lightning pushed the New York Rangers to the brink of playoff elimination with 2-0 victory Sunday night in Game 5 of the Eastern Conference finals.

This was a total shutdown of league's best team in the regular season.

"If we're going to have any chance of winning, that's how we have to do it," Lightning coach Jon Cooper said. "And you look at the way sometimes you get caught up, and we did, judging our game on how many scoring chances we get; and really you should judge your game on how many you give up.

"And we got away from that. Our team has that mentality sometimes, and you have to pull the reins back and talk about what we've talked about from the first day of training camp. It's not how many you score. It's how many you keep out of the net."

Ben Bishop, who gave up all 10 goals in the previous two games, had 26 saves in posting his second shutout and getting Tampa Bay within a win of returning to the finals for the first time since 2004.

Game 6 is Tuesday night in Florida

"Obviously we weren't happy with the last couple of games with how many scoring chances we were giving up," said Bishop, who left pregame warmups early after taking a shot in the groin. "We looked at it, we talked about and I thought we did a better job tonight. Guys came up some huge blocked shots at the end."

Tampa Bay's special teams were outstanding. They killed off four power plays in clinical fashion in the opening 31 minutes of a scoreless game, limiting New York to four shots, and then Stamkos added a power-play goal after Filppula opened the scoring.

"I think we did what the Rangers did last game, we bent, but we didn't break," said Stamkos, who has seven goals in his last 10 playoff games.

"It was a huge effort by our penalty kill," Cooper added. "They get that first one, who knows how this game turns."

This isn't the first time the Rangers have been on the edge of seeing their Presidents' Trophy-winning season come to an end. They trailed the Washington Capitals 3-1 in the conference semifinals and rallied. They also overcame a 3-1 deficit last year against Pittsburgh.

"We just have to go down there and play confident, play our best game, and try to get the win," Rangers defenceman Marc Staal said.

This was a game the Rangers controlled early. The power plays gave them a chance to put Tampa Bay down and they failed to convert, which was surprising because New York had two power-play goals in each of the three previous games in the series.

A little less than 2 minutes after the Lightning killed off a tripping penalty to Andrej Sustr, the Lightning took the lead and the excitement out of the Madison Square Garden crowd.

Defenceman Anton Stralman sent a great bank pass up the side boards to Stamkos. He carried the puck into the Rangers' zone, found Filppula coming down the middle and the centre beat Henrik Lundqvist with a shot to the upper part of the net. It was his third goal of the post-season and probably his most important.

The Lightning had withstood the Rangers' push and they were in control.

After Staal picked up his second penalty of the game, the Lightning needed just over a minute to double the lead. It came on a tic-tac-toe goal by Stamkos, his fourth in the last four games.

Nikita Kucherov sent the puck from the right circle to Ondrej Palat in the left circle. He quickly sent a cross-ice pass to Stamkos in front and the Lightning captain redirected the puck past a helpless Lundqvist, who finished with 20 saves.

New York pushed to get back in the game in the third, but Bishop stood tall when challenged shots by J.T. Miller and Derick Brassard.

After a couple of wide-open games in Florida, the first period of Game 5 was much more a Rangers' style game. They kept the play in the Lightning zone, drew two penalties and held a 6-4 edge in shots.

Tyler Johnson had the best chance for the Lightning early after a Ryan McDonagh turnover, but he missed the net. Chris Kreider missed the top corner of the net on the Rangers' first power play.

NOTES: Long-time Garden voice John Amirante sang the national anthem. He sang in Game 2 in the opening round in what was said to be his last appearance. ... D Matt Carle returned to the Lightning lineup after missing Game 4 with an undisclosed injury. ...Lightning defenceman Braydon Coburn left the game early after getting sick on the bench.