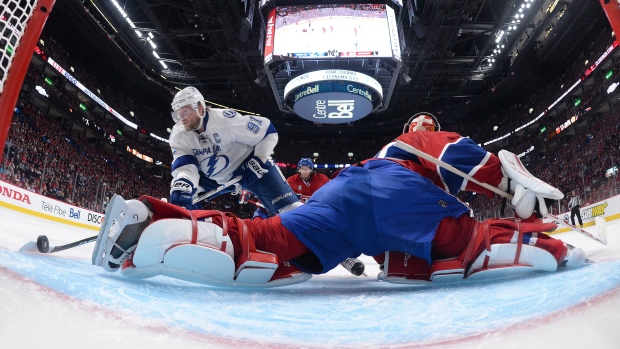 MONTREAL - It was one thing for coach Jon Cooper to see his dormant power play come to life, and another to see captain Steven Stamkos end an agonizing scoring drought.

Both happened in spectacular fashion Sunday as the Tampa Bay Lightning made the Montreal Canadiens pay for indiscipline with four power-play goals in a 6-2 thumping in Game 2 of their second-round playoff series.

"I don't know if it was more relief that he scored or the power play scored, so it was kind of the whole compilation of Alka Seltzer," said Cooper.

After winning twice at the Bell Centre, the Lightning take a 2-0 lead in the best-of-seven series back home to Amalie Arena for Game 3 on Wednesday.

Stamkos, a two-time Rocket Richard Trophy winner, had been analyzed about not scoring in the Lightning's previous eight playoff games.

With the score tied 1-1 at 8:06 of the second period, Stamkos took a puck that went off Andrei Markov's skate and off his own leg to send him in on a breakaway. From there he deked Carey Price and set off a celebration.

"It was definitely a release of some things that have been building up," said Stamkos. "Whether it's my first or my twentieth, at that time of the game, to go up, your emotions are running high.

"Any time you score a goal in the playoffs it's exciting, but that one maybe a little more so than others I've scored."

Nikita Kucherov, with two, Valtteri Filppula and Victor Hedman all scored with a man advantage as Tampa Bay got its first power-play goals since Game 2 of the opening round. J.T. Brown added an even-strength goal late in the third period.

The Lightning power play went 4 for 8 after scoring only twice on 34 chances in their previous games.

"We had a lot of movement, we made smart decisions, we shot the puck hard," said Cooper said. "When you're making tape-to-tape passes you're giving yourself a chance."

Jeff Petry and Tom Gilbert scored for Montreal, which outshot the Bolts 29-24 but went 0 for 3 on the power play. The Habs are now 1 for 26 with the man advantage in the playoffs.

But coach Michel Therrien was less concerned with that than with the penalties his team took. Brandon Prust got a double minor in the first after yapping at a official, then Filppula scored after P.K. Subban was called for cross-checking.

Montreal was dominating the game before the penalties.

"There was no goal bigger than Filppula's," said Cooper. "For them to walk into their dressing room with nothing to show for it was a momentum swinger for us and we took the game over after that."

Habs lose first 2 games of series at home for 4th time in last 30 years. Came back to win series once (1987 vs Que) pic.twitter.com/2m2tuzK9rJ

Things got nasty in the third when Torrey Mitchell bumped into goalie Ben Bishop after a scoring chance and then Prust bumped him again behind the net, prompting a fight with Braydon Coburn. Referee Brad Watson handed the Canadiens tough guy 27 penalty minutes on the play, including a game misconduct.

Cooper said Prust may have tried to injure his goalie. Prust accused Watson of trying to "play god."

Bishop only said: "I don't think Mitchell did that on purpose, but you expect that when the score gets that way."

The Canadiens scored the first goal of a game for only the second time in eight post-season contests when Petry fired a wrist shot from the blue-line at 7:20.

Filppula scored on the power play on a shot from the right circle at 19:36 to tie the game 1-1.

After Stamkos scored, the Bolts got a 4-on-3 man advantage and Tyler Johnson slipped a cross-ice pass to Kucherov for a shot into an open side at 12:29. Then, Price had no chance when Hedman finished a back-door play with Alex Killorn at 19:46.

Kucherov redirected a Johnson pass inside the post 6:37 into the third to make it 5-1 before Gilbert scored from the point at 11:06 for Montreal. Brown added his goal at 16:05.

There were sweeps in both previous playoff meetings between the teams, with Tampa Bay winning in four in 2004 and Montreal doing the same last season.

"I don't know how much home ice has been an advantage in all the playoffs so far," said Bishop. "We look forward to going home, but it's not going to be any easier."