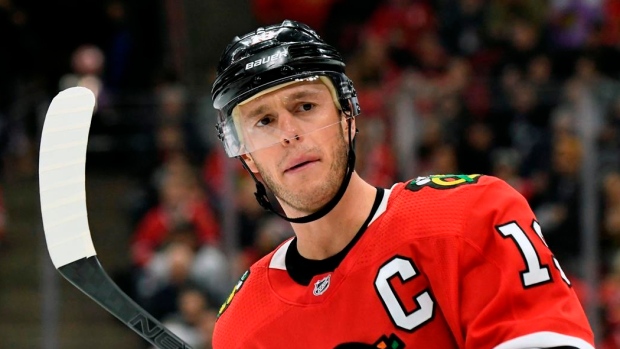 Toews missed the entire 2020-21 season due to an undisclosed medical issue. He was placed on long-term injured reserve by the team in January.

Bowman said Wednesday he last spoke to Toews a few weeks ago and did not have an official update on the centre.

"He's doing well," Bowman said. "We're hopeful he'll be back, but we're going to let it play out and we'll see."

Stan Bowman on Jonathan Toews: "He's doing well." Talked a couple weeks ago, but no official update. "We're hopeful he'll be back."

"This offseason, I've been experiencing symptoms that have left me feeling drained and lethargic," Toews said in a statement on Dec. 29. "I am working with doctors so I can better understand my condition.

"Until I can get my health back to a place where I feel I can perform at an elite level and help my team, I will not be joining the Blackhawks for training camp. I do not have a timetable for when I will rejoin the team. I am extremely disappointed, but it wouldn't be fair to myself or my teammates to attempt to play in my current condition

A three-time Stanley Cup champion, Toews has 345 goals and 815 points over 943 games in 13 career seasons with the Blackhawks. He has served as team captain since 2008.