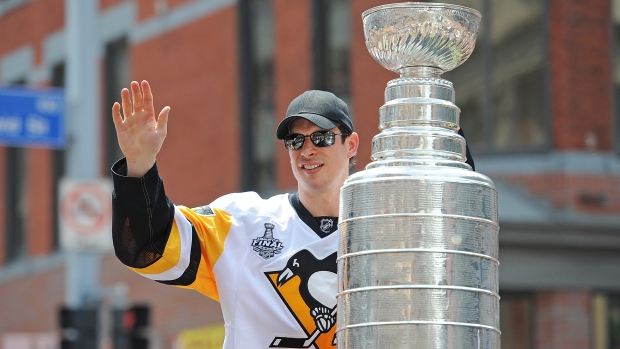 "I support it," Crosby said after the Penguins' 4-1 loss against the St. Louis Blues during the annual Hockeyville USA exhibition game Sunday night. "It's a great honour for us to be invited there."

The Penguins' decision came on a day that President Trump's criticisms of players who kneel during the national anthem sparked a mass increase in such protests around the National Football League. President Trump also rebuked NBA star Steph Curry this weekend for saying he wouldn't attend a White House visit with the league champion Golden State Warriors before rescinding the team's invitation.

The Penguins said they respect the office of the president and "the long tradition of championship teams visiting the White House." The team also attended White House ceremonies following Stanley Cup championships in 2009 and '16, touring the building a visiting briefly with Presidents George W. Bush and Barack Obama.

"I think we all really enjoyed it last year, being able to see something that not everyone gets to see, and to be able to experience the White House," forward Bryan Rust said. "I think for us, as an organization, we relish the opportunity, and it's something we get to do because we are champions, and we're going to make the most of it."

About 200 NFL players sat, knelt or raised fists in defiance on Sunday. A week earlier, just six players protested. Most NFL players locked arms with their teammates — some standing and others kneeling — in show of solidarity. A handful of teams, including the Pittsburgh Steelers, stayed off the field until after "The Star Spangled Banner" to avoid the issue all together.

There were no such protests during the exhibition hockey game between the Penguins and Blues.

The Penguins said the organization respects the rights of other individuals and groups to express themselves as they see fit, but added that any agreement or disagreement with a president's politics, policies or agenda can be expressed in other ways.

"Everyone's got the right to go or not to go," Crosby said. "But we've been invited and we accepted the invitation. I don't think you have to read into it any more than that."