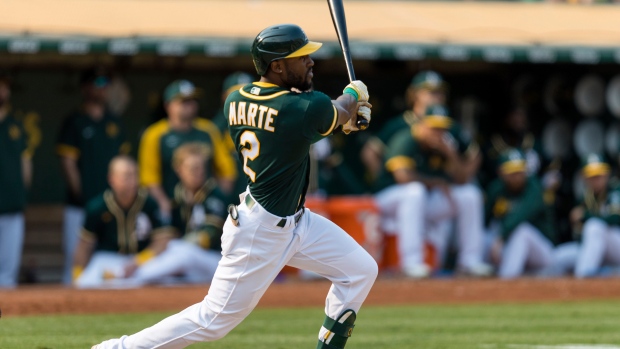 OAKLAND, Calif. (AP) — Starling Marte hit a game-ending double with one out in the bottom of the ninth inning, lifting the Oakland Athletics past the Houston Astros 2-1 on Saturday.

The A’s are four games behind AL wild card co-leaders Boston and New York, with Seattle and Toronto also in their way.

“There’s an element of desperation,” A’s manager Bob Melvin said. “You have to win. That’s what permeates our dugout right now.”

Houston’s magic number to clinch the AL West remained at three over Seattle.

Elvis Andrus singled off Ryan Pressly (5-3) to begin the Oakland ninth. After Josh Harrison struck out swinging, Marte lined an 0-1 pitch into the gap in right-center for his 500th career RBI.

“I was just trying to look for a good pitch I could drive into the gap,” Marte said through an interpreter. “Yan Gomes helped me, gave me some help, something to look for and it turned out OK for us.”

Andrus scored without a throw when center fielder Jose Siri’s throw back to the infield was low. That was significant because Andrus sustained an undisclosed left ankle injury rounding third base and was helped off the field after stumbling across home plate.

Melvin said Andrus felt a pop in his ankle and was taken for X-rays.

“We won a game, that’s good, (but) we may lose one of our toughest guys,” Melvin said. “We’ve got our fingers crossed that it’s not something significant.”

Harrison had an RBI single and Andrus singled twice for the A’s.

“Marte’s been a pain in our side and a pain in my side whatever team he’s been on,” Astros manager Dusty Baker said. “They did a good job of pitching to us. You don’t like it but sometimes that’s how it is. We’re still in good position. We just have to muster up a couple wins here.”

The game was mostly a pitcher’s duel between starters Oakland’s Sean Manaea and Framber Valdez.

Manaea struck out eight while pitching seven innings of three-hit ball. The A’s lefty retired 19 of 21 after allowing Altuve’s double on his first pitch.

“They just pitched really well the last couple of days,” Tucker said. “It’s tough when they’re living on the corners and not throwing it over the plate a lot.”

Valdez gave up one run and three hits in 6 2/3 innings. He walked four and struck out three.

Tucker struck out swinging in his first two at-bats before sending a towering, solo drive off Manaea in the seventh for the Astros’ second hit.

Oakland tied it in the bottom half on Harrison’s two-out bloop single off Kendall Graveman that fell in just over the head of shortstop Carlos Correa. Graveman, the former A’s starter, had just replaced Valdez.

Tucker is batting .369 (38-for-103) in 30 games since returning from the injured list on Aug. 24. … Oakland’s Matt Chapman, who tied a franchise record with five strikeouts on Friday, was in a 10 for 63 (.159) slump when he drew a one-out walk off Graveman to load the bases in the eighth … Tony Kemp struck out looking as a pinch-hitter, ending a streak of 88 consecutive plate appearances without striking out. It was the longest streak by an A’s player since 1974.

Athletics: Harrison was back in the lineup after being forced out of Friday night’s game when he fouled two balls off his lower left leg in the same at-bat.

Astros RHP Jake Odorizzi (6-7, 4.22 ERA) is expected to be activated off the 10-day injured list to start the series finale Sunday. Athletics RHP Paul Blackburn (1-3, 5.17) has allowed 13 earned runs in 6 1/3 innings in his two career appearances against Houston.