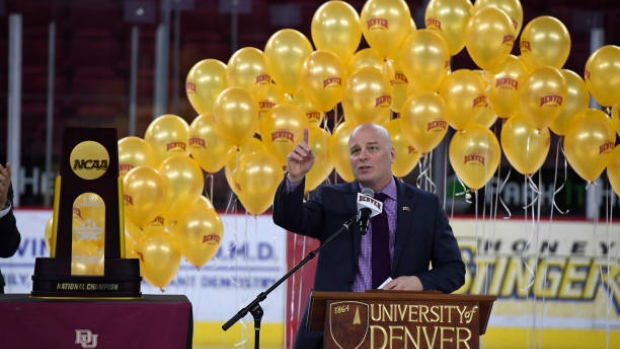 McKenzie reports an announcement is expected to be made later this week. TSN Senior Hockey Reporter Frank Seravalli reported Tuesday Montgomery was one of roughly 10 coaches interviewed by general manager Jim Nill for the vacant position.

As I believe @ChrisDilks was first to suggest a day or so ago, Jim Montgomery is going to be the next head coach of DAL. Announcement expected this week.

Montgomery was also linked to the head coaching job with the New York Rangers.

The 48-year-old spent the past five seasons coaching the University of Denver and led the team to a national title in 2017. He had a 125-57-26 record since taking over the Pioneers in 2013, reaching the Frozen Four twice.

Montgomery, who has no National Hockey League experience behind the bench, is no stranger to interest from NHL teams. The 48-year-old appeared to be the leading the candidate for the Florida Panthers head coaching job a year ago before pulling himself out of the race. The New York Post reports he was also offered an assitant coach role by the Los Angeles Kings last year, but turned it down.

A dominant college player at the University of Maine, the Montreal native appeared in 122 NHL games as a player, but spent his most of his career in the AHL. He retired from playing in 2005 and became an assistant coach with Notre Dame for the 2005-06 season.

Hitchcock retired last month after returning to the Stars for just one season. Dallas finished the regular season with a 43-32-8 record, missing the playoffs by three points.