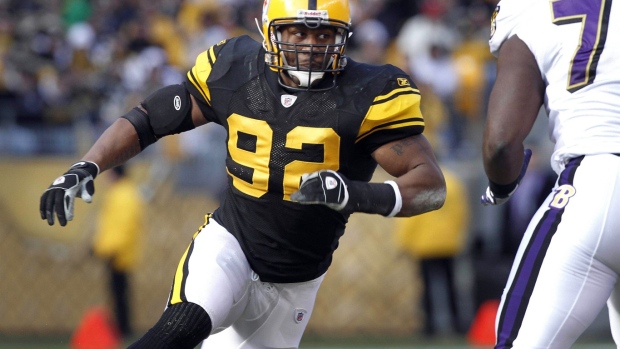 Harrison had briefly retired last August after he was released by Cincinnati in March following one season with the Bengals. He then re-joined the Steelers in late September last season and totaled 45 tackles with 5 1/2 sacks in 11 games for the club.

Signed by the Steelers as an undrafted rookie free agent in 2002 and released the following year, Harrison emerged as one of the team's core players when he returned in 2004 and helped the franchise to a pair of Super Bowl titles.

Harrison is first in team history with 17 multi-sack games, and ranks second in sacks with 69 1/2. He was the NFL Defensive Player of the Year in 2008, earned five straight trips to the Pro Bowl from 2007-11 and was a First-Team All-Pro twice.

The Kent State product also played 13 postseason games with the Steelers and registered the longest interception return in Super Bowl history with a 100- yard touchdown against the Arizona Cardinals in Super Bowl XLIII.