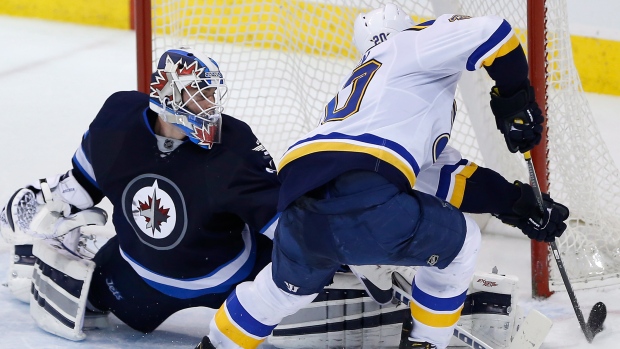 Steen scored the winner in a shootout as the St. Louis Blues defeated the Winnipeg Jets 2-1 on Thursday while Reaves assisted on Patrik Berglund's goal in regulation.

When the Blues were last in Winnipeg in late November, Reaves scored the game-winner in a 4-2 victory and Steen had a pair of assists.

"I guess we like coming home once in a while," Reaves said with a smile.

Vladimir Tarasenko also scored in the shootout for the Blues (39-18-4), while Brian Elliott made 30 saves through regulation and overtime.

It was a game the Central Division teams described as a playoff type with tight-checking— a big-hit contest.

"We had to take some hits to make the plays and the guys see that and feed off of each other," said Elliott, who's now won six of his last seven road starts.

"Big hits, but we made the plays to get it out, get it in and those are the important plays."

Andrew Ladd had the lone goal in the shootout for the Jets (31-20-12). Mark Scheifele found the back of the net in the third period.

Rookie Michael Hutchinson stopped 28 shots and recorded his first-career shootout loss in five contests. He has points in his last seven starts (4-0-3).

"Teams in our division, they play that strong, physical, defensive style and you have to be ready for it from the puck drop to be on the puck and to win battles," said Ladd, who assisted on Scheifele's goal for his 200th point with the franchise.

Berglund got the game's first goal with 1:49 left in the second period, but the Jets tied it up with Scheifele's 10th goal of the season at 3:14 of the third.

"All the games that we play against St. Louis going back to last year have all looked like that," Jets coach Paul Maurice said.

"They're very structured in the way they play and they're going to try to beat you that way, and that way only. And that's where we're trying to get to."

The clubs still have three games against each other this season, with two in St. Louis.

The contest began a five-game road trip for the Blues, who are playing 11 of their next 14 games away from home. They travel to Edmonton for a game on Saturday.

Berglund scored his eighth of the season when he went down the ice with Paul Stastny, who sent him a pass across the front of the net for a shot that went over Hutchinson's glove at 18:11.

Earlier in the period, Berglund took a crushing hit into the boards from Dustin Byfuglien, who was moved back to defence after the Jets acquired winger Jiri Tlusty in a trade with Carolina on Wednesday.

Blues coach Ken Hitchcock said he moved Reaves up to a line with Stastny and Berglund to counter the physical tone.

"We needed way more weight against who they were defending against," Hitchcock said.

"I thought Ryan really, really helped that line. He gave those guys some room and some space. They scored a big goal for us."

Tlusty was on the second line with Scheifele and Drew Stafford. He had a good chance late in the period to score, but fired the rebound from a Stafford shot over the net.

Scheifele scored his goal after Ladd fed him the puck from behind the net to inside the faceoff circle as Blues defenceman Alex Pietrangelo's stick broke in front of the net.

Winnipeg was without top-line winger Blake Wheeler (lower body) for a second straight game. He was replaced by Michael Frolik on a line with Ladd and centre Bryan Little. Wheeler may be back for Sunday's home game against Los Angeles.