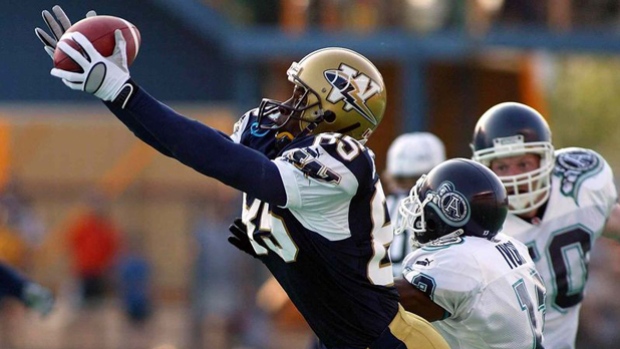 Stegall, the Blue Bombers’ all-time leader in receptions, yards, and touchdowns, played his entire 13-year CFL career with the Blue Bombers from 1995-2007. Stegall has the most career touchdowns in the CFL with 147, and is second all-time in receiving yards with 15,153.

Walby played all but the first five games of his CFL career with the Blue Bombers from 1981-1996. Walby was a nine-time CFL All-Star and was named the league’s top offensive lineman in 1987 and 1993.

Ploen quarterbacked the Blue Bombers from 1957-67 and was a four-time Grey Cup champion and two-time Blue Bombers Most Outstanding Player. Ploen, who was named a league All-Star at QB in 1965, was also a distinguished defensive back for the Bombers and was named a West Division All-Star at the position in 1959.

Ploen was one of six selections that were with the Bombers during their dominant run in the late 1950s and early 1960s, including head coach Bud Grant, who led the Bombers to four Grey Cup titles in his 10 seasons (1957-66) with the team.

Other notable names include Doug Brown, the Canadian defensive lineman and seven-time CFL All-Star, Bob Cameron, the long-time punter who was part of three Grey Cup wins in Winnipeg, and Charles ‘Blink’ Roberts, the team’s all-time leader in rushing yards with 9,987.

And while two members of 2019 Grey Cup winning squad made the All-Time roster in defensive end Willie Jefferson and offensive tackle Stanley Bryant, one notable name not part of the team is running back Andrew Harris.

Harris has been named a West Division All-Star in all four of his years with his hometown Bombers, a league All-Star in three of them, the league’s Most Outstanding Canadian in 2017, and the Grey Cup MVP last November. But he lost out at the running back position to Roberts and Leo Lewis, who was part of Winnipeg’s four Grey Cup wins under Grant and finished with 8,861 career rushing yards and six West Division All-Star selections.

James, who played for Winnipeg from 1952-63, was a four-time Grey Cup champion and two-time Most Outstanding Canadian.

Casey, who played for Winnipeg from 1950-55, was a six-time All-Star and the first black player inducted in the Canadian Football Hall of Fame in 1964.