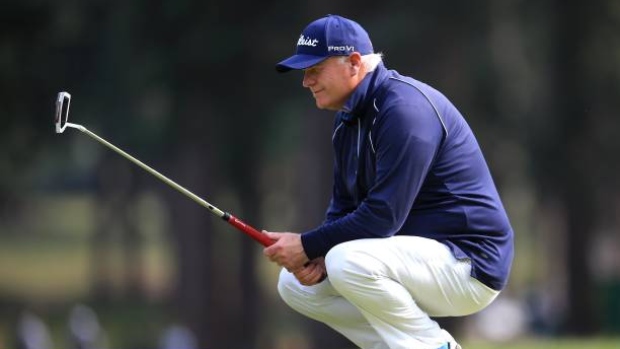 SUNNINGDALE, England (AP) — Stephen Dodd equaled the lowest round in the history of the Senior British Open by shooting an 8-under 62 on Saturday to take a two-stroke lead after three rounds.

The Welshman made nine birdies in a round that also tied Sunningdale’s Old Course record that was set by Nick Faldo at the 1986 European Open and then tied by Shane Lowry in British Open qualifying in 2010.

Jerry Kelly was two shots back after carding a 68 and day two leader Darren Clarke (70) slipped three strokes off the lead in the final senior major championship of the year.

Defending champion Bernhard Langer (70) was four shots off the pace with Miguel Angel Jimenez (67) and Paul Broadhurst (69). Jimenez was the winner in 2018, and Broadhurst won two years before that.

Dodd birdied four of his first five holes and only dropped one shot in a stellar performance that had him on 11-under 199 heading into the final round.

“I’ve played so little competitive golf over the last 18 months," he said. "I’ve played one event, so I’m not really sure what will happen. With a little luck, you never know.”

Dodd credited his record-tying round to the course — and some luck.

“The course is just set so well, so fair. If you play well, then there's chances out there, and luckily today for me I got some of them in,” he said.

The 63-year-old Langer won in 2019 at Royal Lytham & St. Annes for his fourth victory in the event. The 2020 tournament was canceled because of the coronavirus pandemic.

Dodd joins Harold Henning and Jim Colbert in the Senior British Open history books. Both posted 8-under 62s at Turnberry — Henning in 1990 and Colbert in 2003.

A three-time European Tour winner, Dodd made his Senior Tour debut at the Senior British Open in 2016, when he had his best finish at the event — a share of 14th place.

The Welshman, who won his first professional title at the 1992 Austria Open, is a three-time winner on the European Senior Tour. His last victory was on his 52nd birthday when he finished off a wire-to-wire victory at the Winston Senior Open in Germany.

Kelly, who leads the Schwab Cup, has yet to post a top 10 in this three Senior British Open appearances.