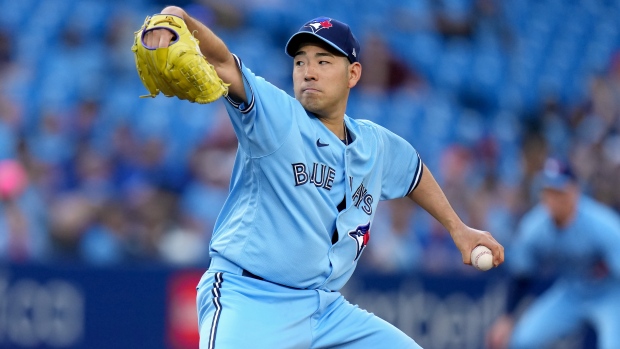 When a player joins a new team there is a get-to-know-you period. It’s a time where the coaches watch, take stock, and make small suggestions. They do more listening than talking. Then, once there is a relationship and trust built, the real adjustments can be made.

When Yusei Kikuchi reported to camp, the Jays staff knew they needed to build a trusting relationship with their new lefty. The reports out of Seattle, where Kikuchi pitched for three seasons, indicated that there was a disconnect between him and the Mariners staff.

Kikuchi is an analytics darling despite not having produced at an elite level. As a free agent, clubs loved his stuff and thought that if he cleaned up his mechanics and sequencing of pitches, he could harness his potential.

The Jays saw the same potential, and in many ways, thought that he could be the next Robbie Ray. Ray had always had good stuff that he couldn’t quite command and locate. But Jays pitching coach Pete Walker was able to connect with Ray and get him to make the necessary adjustments and then buy in. Walker hoped to do the same thing with Kikuchi.

The 30-year-old starter’s first several outings were merely mediocre. He didn’t throw enough strikes and had plenty of runners on the bases. But he has been excellent over his past three starts. Kikuchi is 2-0 with a 1.56 ERA in May, allowing six hits and seven walks in 17.1 innings while striking out 20. The hard work he has done with Walker has cleaned up his delivery and created a trusting relationship that has allowed Kikuchi to dramatically change his pitch selection and sequencing.

Ray became a fastball and slider pitcher in his Cy Young season in 2021. That is what we have seen Kikuchi evolve to over his three good starts. Kikuchi’s fastball averages about 95 mph, just like Ray. It’s a good pitch, and there is still more room for him to gain confidence in it. He walks a few too many hitters but that can be alleviated once he fully accepts that his heater is enough, and he doesn’t need to nibble the corners of the plate.

Kikuchi has gotten better and there is still room to grow.

The Yankees are for real

Yankees general manager Brian Cashman took a lot of heat this past off-season over his lack of urgency. But the moves he did make have remade the dynamics of the team. The Yankees emphasized run prevention with improved pitching and defence. Plus, Yankee sluggers Giancarlo Stanton and Aaron Judge are both having powerful starts to their seasons.

The Blue Jays must be careful to not let the Yankees get too far away from them in the standings. It is too early in the season to declare the Yankees division champs. There is still plenty that can go wrong and cause a slide back in the standings. And yes, there will be six teams making the playoffs instead of five, but Toronto can’t just hope to slide in on the back end if they want to win the World Series.

The Yankees are going to have a 38-game stretch where they go 20-18 like the Jays have. Can the Jays get red-hot and go 28-10 like the Yankees? The Jays need to get their act together before the Yankees really run away with the division.

The Yankees are for real. The Jays need to capitalize if they show any crack in their armour.

Judge bets on himself

Speaking of the Yankees, a lot was made of the contract negotiations with star outfielder Aaron Judge. Both sides hoped they could get a deal done by Opening Day to lock up the impending free agent, but they couldn’t find the right deal.

The Yankees reportedly offered seven years and $213.1 million. I though Judge should have taken that deal. He may be worth more than that and get more when he goes to free agency, but he is taking a huge risk. Judge has been on the injured list six different times in his career. He is one injury away from scaring other big-money teams away and not getting even half of what he was offered.

I have great respect for Judge betting on himself. I love his courage, but I wouldn’t ask him for financial advice. The risk is far greater than the reward of more money per year for what will be a 31-year-old free-agent outfielder with injury history. I would have taken the security. Then again, I am not going to lead the league in home runs, and he just may.

Regardless of when he signs and for how much, I suspect he will be a Yankee for life. They will find the right deal after the season. I feel badly for pitchers in the AL East now and in the future because “Here Comes the Judge.”