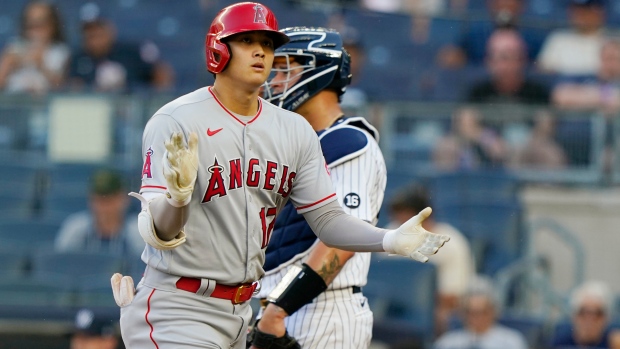 It went from “Showtime” to “No-time” for Shohei Ohtani this week in New York.

Ohtani, the hitter, homered on Monday and then twice more on Tuesday against the Yankees. He took the Big Apple by storm. Yankees fans were actually cheering for him and celebrating his greatness. Fans and media were already engraving his name on the MVP trophy, aggressively dismissing Vladimir Guerrero Jr.’s case for the award.

But Ohtani the pitcher imploded on the mound on Wednesday, only able to complete two-thirds of an inning while allowing seven runs. His ERA jumped from 2.58 to 3.60.

Baseball will humble even the best of players. But Ohtani doesn’t need humbling as he is one of the most unassuming talents in the game. It doesn’t seem like baseball is a job to him. He reminds me of an extremely talented teenager playing on a travel team. He can outrun, outhit and outpitch most players who focus exclusively on one position.

The Angels superstar leads the AL in home runs and is on pace for 50 homers this season. His ERA might have ballooned after his last start, but he is still remarkable. There is nothing like him in MLB. He is a unicorn.

People want to compare him to Babe Ruth, but Ruth never really did what Ohtani is doing – being both an everyday player and a starting pitcher. Ruth was almost exclusively a pitcher with the Red Sox and then almost exclusively a position player with the Yankees. The better comparison is to Bo Jackson, who was a football and baseball star at the same time.

Jays fans will get another close-up look at the 26-year-old in August when the Jays play four games in three days in Anaheim. The head-to head competition with Guerrero could really be fun, especially if Ohtani pitches.

Jays should explore extension with Semien

Jays’ second baseman Marcus Semien has been one of the best free-agent signings this past off-season. He is playing like he did in 2019 when he was third in AL MVP voting. He is on pace for a 40-homer, 20-stolen base season.

That’s the good news. The bad news is that he is only signed through the 2021 season. Unless something changes, he will go to free agency at the end of the season. He would join Trevor Story, Carlos Correa, Corey Seager, Freddy Galvis, Jose Iglesias and Javier Baez in the available player pool for teams that need a shortstop. Semien has even more value because he has proven he is also an excellent second baseman. The supply of middle infielders may help to keep the price down in the marketplace.

Even though the Jays have top infield prospects Jordan Groshans, Austin Martin and Kevin Smith on the way, Semien would be a priority for me to re-sign. He offers quality offence, defence and leadership. It may take allowing him to declare free agency to test the market, but he is such a good fit that he would be worth the wait.

In fact, it would be worth testing the waters with him during the All-Star break on a possible extension. There should be enough room in the budget for Semien and another impactful starting pitcher.

Jays in the Midsummer Classic

The Blue Jays are the only team in the majors with three starters in the All-Star Game: Guerrero, Semien and Teoscar Hernandez.

Guerrero was the top vote-getter and the youngest player ever to do so. Hernandez barely beat out injured Twins outfielder Byron Buxton to join Mike Trout and Aaron Judge as starters in the American League outfield.

I believe there is still a good chance that shortstop Bo Bichette will be added to the AL roster as a reserve as well. The young core of this team is going to be good for years to come. Hopefully general manager Ross Atkins can get them signed to long-term deals sooner rather than later.

It's that magical time of year…

I hope you all had a Happy Bobby Bonilla Day! Yes, it has come around again. The day that the retired New York Mets infielder/outfielder gets a cheque for $1,193,248.20 from his former team.

Bonilla was released by the Mets in 2001 with one year and $5.9 million remaining on his contract. I was general manager at the time. Ownership suggested that we ask him to defer the money far into the future rather than paying him salary in one lump sum.

I’m sure you’re familiar with the name Bernie Madoff. The financier was the mastermind of the biggest Ponzi scheme of all time. Madoff was a close friend of then Mets owner Fred Wilpon. The Mets and Wilpon had millions of dollars invested with Madoff. He was an investment vehicle for the organization.

It was the relationship with Madoff that prompted the deferred compensation offer to Bonilla. Rather than paying him his salary, the Mets offered to defer his money for a decade (2001-2011) and then pay it out over 25 years (2011-2035)  in equal installments.

The Mets figured that Madoff would make them more than the 8 per cent interest that had been negotiated with Bonilla’s agent. The anticipation was the Mets would make millions on Bonilla’s money. As we know, the Madoff house of cards collapsed and so did the Mets’ plan.

But Bonilla still gets paid. And I don’t even get a Christmas card from him.

- On Wednesday, there were 204 runs scored in the 15 games played: six teams scored double digits and 20 clubs scored five or more runs. Offence is returning to the game, and it is not hard to attach cause and effect to the enforcement of the foreign substance policy. Spin rates are on the decline and batting averages are going up.

- Former Blue Jay Josh Donaldson called out Yankee starter Gerrit Cole for his drop in spin rates last week and this week he called out White Sox ace Lucas Giolito for the same thing. It’s baffling that Donaldson has been the only outspoken position player on the topic. Pitchers have been taking money out of the pockets of hitters over the past several years. But it’s not surprising that Donaldson spoke up. He doesn’t care what other people think about him. I wish more players would speak up.

- The Yankees suffered their most devastating loss of the season on Wednesday night against the Los Angeles Angels. It happened to be the game in which Ohtani started and couldn’t complete the first inning. The Yankees scored seven runs in the opening frame and took an 8-4 lead into ninth inning. The Angels scored seven of their own runs in the ninth and went on to win 11-8.  Yankees fans are booing regularly and have been chanting “Fire [manager Aaron] Boone!) The fan base is rabid, and the media are like sharks in the water. General manager Brian Cashman had previously given the coaching staff his vote of confidence and owner Hal Steinbrenner did the same on Thursday. Cashman and Steinbrenner still consider themselves buyers at the trade deadline and would be willing to go beyond the luxury tax threshold if necessary. It looks like it will be necessary.

- Here come the Washington Nationals. Just like they did in 2019 when they went on to win the World Series after a 19-31 start, the Nats are recovering once again. They have won 14 of their past 17 games, led by slugger Kyle Schwarber who hit 16 homers in 18 games. Schwarber, shortstop Trea Turner and right fielder Juan Soto are all heating up. It seems that the Nats might be buyers now instead of sellers. A week ago, it looked as though ace Max Scherzer might be dealt, but now it is likely he finishes his contract with Washington.

- The Milwaukee Brewers were tied with the Cubs last week for first place in the NL Central. Since then, they haven’t lost, and the Cubs haven’t won. In fact, the Cubs haven’t won since their combined no-hitter last Thursday against the Dodgers. A key for the Brewers (49-33), who now have won nine in a row, has been the play of Willy Adames. The shortstop was acquired from the Tampa Bay Rays on May 21 and the Brew Crew has gone 29-10 since. Adames has turned his season around and is now hitting and making every play defensively. His energy is infectious, and he seems inspired by the crowds in Milwaukee. The Brewers are very good and will be a scary team in the postseason with the quality and depth of their pitching staff.