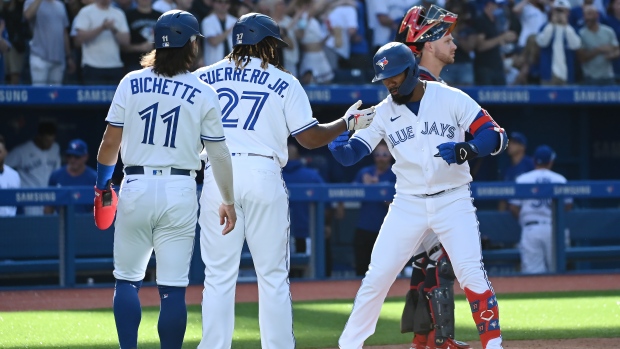 They are around the turn and headed home. The Red Sox, Yankees and Blue Jays all have nine regular-season games left to play. Three teams battling for two wild-card spots.

The Yankees and Red Sox play each other this weekend in Boston. The Blue Jays would love one of the two to sweep the other. Boston has won seven straight games, while the Yankees are coming off a series sweep against the Texas Rangers. Both teams are on a roll.

While those two heavyweights square off, the Jays have an opportunity to beat up on the last-place Minnesota Twins (68-85) for three more games. If the Jays win the remaining games of the series, they have a chance to have as much as a two-game lead over the Yankees with six games to play (if the Red Sox sweep) or could possibly have sole possession of the second wild-card spot still one game behind the Yankees and a game ahead of the Red Sox.

This weekend is critical for all three teams but especially for Toronto and New York because they face each other in Toronto for three games in the middle of next week. This weekend could allow for some margin for error for the Jays as they get ready for that big series. Boston heads to last-place Baltimore after the Yankees series.

The final weekend is favourable to the Red Sox and Blue Jays. The Sox head to Washington for the final three regular-season games while the Jays host the lowly Orioles at the Rogers Centre. The Yankees, on the other hand, welcome their nemesis, the division-leading Tampa Bay Rays, to the Bronx.

With all the traffic in front of them, the best the Mariners can probably hope for is a tie for the second spot and a game 163 to determine the second wild-card position. They play the Angels (six games) and the A’s (three games), who they just swept.

The Yankees have the toughest road to the postseason. They must run the gauntlet of the AL East. The Red Sox and Jays play the Yankees and then six games against last-place teams.

The Blue Jays will likely need to go 6-3 to earn the second wild-card spot. That record would most likely at least earn them a game 163 and a chance to play into the wild-card game; 7-2 will definitely get them there and might even lead to the top wild-card spot and hosting either the Yankees or Red Sox on Tuesday, Oct. 5. If the Jays go 5-4 over the last nine, they are going to have to hope the Yankees sputter and the Mariners cool off. Plus, they will need to make sure that three of the wins are against the Yankees. That is a longshot.

The Blue Jays will likely play a man down once MLB hears the appeal of the three-game suspension handed down to Jays reliever Ryan Borucki for beaning Tampa Bay Rays outfielder Kevin Kiermaier in the eighth inning on Wednesday. I expect MLB to hear his case quickly and resolve it before season’s end. Manager Charlie Montoyo was suspended for one game, which he served on Thursday.

The Rays were incensed by what they believed was retaliation for Kiermaier picking up a Jays’ scouting report card out of the dirt after catcher Alejandro Kirk dropped it at an inning-ending play at home plate on Monday night. The Rays thought that the issue had been discussed and put to rest between the managers before the game on Tuesday.

Borucki said the ball slipped and it wasn’t intentional. I have never heard a pitcher say, “Yep, I did it. I drilled him intentionally.” The Rays thought it was on purpose, as did the umpires. I agree.

If a team is looking for retaliation or to send a message to a player, it would typically be delivered in the eighth inning of a 7-1 game when it’s not necessarily going to impact the outcome of the contest. That was the exact situation when the Rays outfielder was hit by the pitch.

Montoyo and pitching coach Pete Walker said they didn’t order the retaliation, and I believe them. It’s not in their character. Plus, Walker went nuts on the umpires when Borucki was ejected because it meant they had to use another pitcher after already using five on the day.  They certainly didn’t want to have to use Nate Pearson to finish the inning.

From my experience, this was player-driven or Borucki took it upon himself to send the message. But it should never have happened. GM Ross Atkins and Charlie Montoyo should have had a team meeting on Tuesday to tell the players that this is not the time for retaliation.

This happened with 10 games remaining in the season and the Jays fighting for a playoff spot. It is bad enough that they will lose Borucki for three games and not be able to replace him. But what if the Rays players had come charging out of the dugout instead of just moseying out? The Jays’ first line of defence would have been Vladimir Guerrero Jr. He could have been caught up in the fight, or even worse, been injured. There is a time and a place to respond, if so desired, but that was not it.

Kiermaier says he hopes the Rays play the Jays in the playoffs. The Jays are hoping for that too. A rematch would be fun.

Ryu gets a rest

Hyun Jin Ryu last pitched a week ago against the Twins. He was placed on the injured list afterwards with a sore neck. He had been dealing with forearm tightness for a couple of weeks and now his neck is ailing.

Ryu has a 7.21 ERA since the beginning of August. He hasn’t been right for a while. A 10-day rest on the IL might be just what his arm needs to regain some strength. The Jays believe he will be back when the 10 days are up, but they will be holding their breath to see what they get when he takes the mound again.

The good news is that if Ryu doesn’t return to his first-half form, the team is four deep with quality starters. Robbie Ray (2.21 ERA), Steven Matz (2.94 ERA), Jose Berrios (3.39 ERA) and Alek Manoah (3.68 ERA) have all had great second halves and still give the Jays a solid postseason rotation.

If Ryu returns from the IL and delivers two pretty-good starts or better, then he should get the ball in the division series. I know it would be tough, but if Ryu isn’t at or near his best, he should be left off the playoff roster. Ray would make the wild-card game start for me if he lines up to do so. There is a lot that can happen between now and next Sunday.

Ryu has shown in the past that an in-season break has been beneficial. The Jays are hoping it will be this year, too.

- There was a lot of negativity around the White Sox hiring of 76-year-old Tony LaRussa as their manager last fall. Many thought he was too old. Some said he had been out of the game as a manager for too long and the game had passed him by. Other felt he couldn’t relate to players of today. But he has once again led a team to a division title with hope of getting to his seventh World Series. LaRussa has slowed down physically but has shown that he still has a great baseball mind. Depending upon the health of their starting pitching, the White Sox could be a tough matchup in October.

- The St. Louis Cardinals always seem to find a way. They never seemed to get traction during the first five months of the season. They were three games out of the second wild-card on Sept. 10, but after their 12th straight win on Thursday, they are now the second wild-card team and have a five-game lead over the Cincinnati Reds.  It has been a dramatic turnaround. They are hitting, pitching and fielding at the highest level.  They are also the best base-running team in baseball. They don’t steal the most bases, but they take extra bases whenever they are available. They hustle all the time.

- The Baltimore Orioles and Arizona Diamondbacks are duking it out to see who ends up with the worst record in baseball. Both teams have 104 losses. The other thing they have in common is that they both just extended the contracts of their managers for the 2022 season. Orioles manager Brandon Hyde has a career managerial record of 128-247, which is the lowest winning percentage of any Baltimore manager in history. Torey Lovullo has managed Arizona since the 2017 season. This year has been awful, including a combined 8-48 record in May and June. Fortunately for both managers the organizations are not making them scapegoats for significantly undermanned rosters. The Orioles have been rebuilding and the Diamondbacks are starting to do so. If the organizations don’t show progress, they may not be so lucky next year.

- I do expect at least two managerial changes this off-season. Luis Rojas, the New York Mets manager, will likely not be asked to return as they have had a disappointing season, and they are looking to bring in a new front office who will be able to hire their own person. San Diego Padres manager Jayce Tingler won’t likely survive either.

- On July 28, the day of the trade deadline, the Padres had a firm grip on the second wild-card spot with a five-game advantage over the Reds. In fact, they were just 3.5 games behind the Dodgers for the first wild-card spot. There were rumors that day that the Padres were finalizing a deal to acquire ace pitcher Max Scherzer from the Washington Nationals. Not only did the Padres not get him, Scherzer ended up with the rival Dodgers, who also acquired All-Star infielder Trea Turner in the deal. Since then, the Dodgers have gone 36-14 and have a 14.5 game lead over the Cardinals who are the second wild-card team now. The Padres have gone 18-30 and are six games behind the Cardinals and 20.5 games behind the Dodgers. That is a complete and total collapse in every aspect of the game. Padres stars Manny Machado and Fernando Tatis Jr. had a dugout argument this week. Everything that could go wrong, has gone wrong.