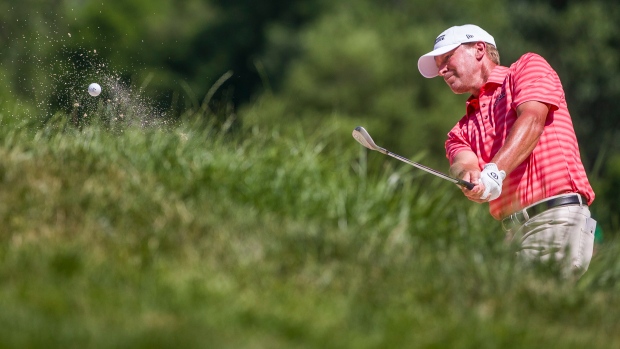 AKRON, Ohio (AP) — Steve Stricker decided at the last minute to play the Senior Players Championship instead of the PGA Tour, and he made it pay off Thursday at Firestone.

Stricker holed a bunker shot on the par-3 12th for a birdie, ran off three straight birdies at the end of his opening nine holes and kept bogeys off his card for a 7-under 63. That gave him a four-shot lead over Ken Duke and Paul Broadhurst.

It was just the start he needed after his last two events on the PGA Tour Champions. The Ryder Cup captain lost a great chance to win the Senior PGA Championship at Southern Hills with a 77 in the final round, and he got off to such a poor start in his American Family Insurance Championship that a closing 65 was only good for a tie for seventh.

On the PGA Tour or against guys his own age, putting — the hallmark of his career — has held him back and Stricker found himself tinkering at home in Wisconsin.

“I haven’t been putting like I’m accustomed to putting, so I’ve been really grinding on that a lot at home, changing grips and putters all over the place,” he said. “I got a new grip on the putter this week, but we’ll see. I’m working at it. It hasn’t been great, but today was good.”

Duke chipped in from behind the 18th green to close out his round of 67.

The group at 69 included defending champion Jerry Kelly, who is coming off his second straight victory in Wisconsin.

The putter grip Stricker used Thursday was the same one he had when he won the Chubb Classic earlier this year in Florida. And then he went to something else, typical of most players, although in this case he said his putting was still not great that week.

“I gave it another chance,” he said. “My are tighter.”

Stricker for years used the same putter during his best run on the PGA Tour. Now he’s tinkering, even experimenting with the arm-lock method used by the likes of Bryson DeChambeau and Matt Kuchar.

He’s not ready for that just yet.

“I’m a left dominant-sided putter, left arm putter, so even the arm lock feels good to me, but that’s another level,” he said. “So I’ve been going the other way and putting this grip on and that feels pretty good.”

Starting on the back nine in windy conditions, Stricker hit 6-iron to 4 feet on the 11th hole, followed with his bunker shot on the 12th and then hit a lob wedge to 4 feet on the par-5 16th, holed a 20-foot birdie on the 17th and knocked it in from 10 feet behind the hole at No. 18.

Only seven players broke par on the South Course, that previously hosted a World Golf Championship.