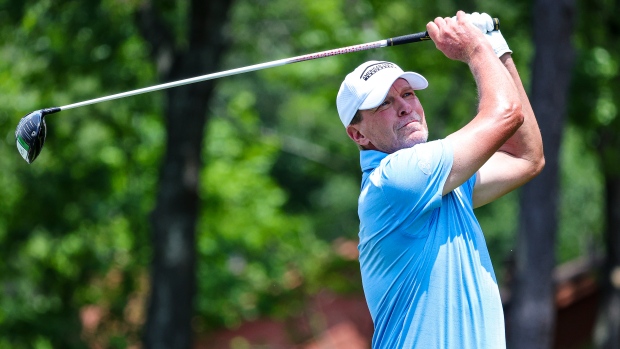 THE WOODLANDS, Texas (AP) — Steve Stricker wanted to stay in bed Saturday morning and some of the players at the Insperity Invitational probably wish he did. Stricker took advantage of calm conditions with a 7-under 65 for a three-way share of the lead in his return to the PGA Tour Champions.

Stricker, who lost 25 pounds during a health scare that hospitalized him late last year, is competing for the first time in six months and already has a chance to win.

He was tied with Steve Alker (65) and hard-charging Brandt Jobe (64), who ran off five straight birdies on the back nine and then closed with another birdie when his 5-iron caromed off the wood framing the lake on the par-4 18th at The Woodlands.

Stricker had said he is still 10 pounds lighter than when he first started feeling ill, about a month after the U.S. captain led his team to a rout in the Ryder Cup at Whistling Straits. He also was concerned with endurance having only played cart golf when getting ready.

It just hasn't looked that way on the golf course.

He said he told wife Nicki, who is caddying for him, that maybe he shouldn't play next week if this is how he was going to feel — tied for the lead after one round and still feeling lethargic instead of excited about contending. That feeling went away.

“It's just a progression, I think, and just keep plugging along,” Stricker said. “Feel a little out of sorts when I'm up around the lead. It's been awhile, but it's good. It's what I come out here for, and excited to be in this position.”

For Jobe, it was a mild surprise.

He was playing solidly and then surged into contention with five straight birdies, most of them in the 10-foot range except for one birdie that he chipped in. The surprise came at the end.

Jobe pulled his tee shot into the trees left of the 18th fairway. He wanted to go left and keep it just short of the green. Instead, his 5-iron from 187 yards came out straight at the flag, and Jobe expected it to go in the water.

It hit the wooden frame, bounced out to about 12 feet beyond the hole and he made it for a birdie to share the lead and have a chance at his third PGA Tour Champions win, and his first since the Boeing Classic in 2019.

Mike Weir is the top Canadian in the field. He shot a 69 Saturday to move into a tie for 17th. Vancouver's Stephen Ames fired a 70.

Alker had a wild time on the back nine, too. He opened and closed with pars. In between, he had two eagles, three birdies and two birdies. It added to a 31 on the back for a 65 and a chance to get over a playoff loss a week ago in the Dallas area.

Right in the middle of it all is Stricker, whose last competitive round was Oct. 10 until this week.

“I thought he didn't feel well,” Jobe said with a laugh. “He's just got his game in a spot where he can turn it on and turn it off and not many people have been able to do that. He’s got his swing and everything just in a spot where he goes out, he puts the work in, he comes back and it’s like he hasn’t missed a beat.”