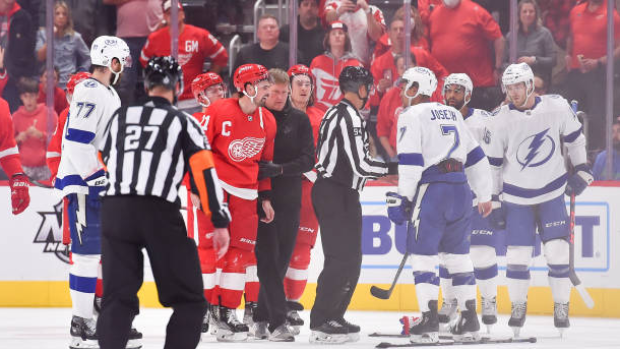 The punch came seconds after Joseph drove Larkin head-first into the boards in the Red Wings’ end midway through the second period. Larkin got up from the hit and threw a punch at Joseph as he was skating by.

“Obviously, he’s mad about you know the borderline hit there, but there’s different ways to go about it," Lightning captain Steven Stamkos said. “You can grab a guy and then punch him in the face. But it’s just an unsuspecting guy, it’s a sucker punch.”

Button on Joseph hit: 'He needs a two-game suspension'

The Lightning and Red Wings may have already played one of the more eventful games of the NHL season; A 7-6 overtime win for the Lightning that saw Red Wings' captain Dylan Larkin ejected after retaliating on Mathieu Joseph for being boarded. TSN's director of scouting Craig Button joins Jay Onrait to talk about how the league should handle both plays.

Joseph was not penalized for his hit on Larkin, but he and Jan Rutta both received roughing minors in the ensuing scrum.

"Say what you want about the Joseph hit, there was no penalty called at all," Lightning head coach Jon Cooper said. "Then the melee starts, and there's the intent to injure, and for us to come out of that four-on-three was mind-boggling to me. I don't know how that got rewarded, but it did."

Joseph, who left the ice after the hit, returned for two shifts in the second period but did not play in the third period.

"We hope so," Cooper said when asked if Joseph was alright.

Red Wings head coach Jeff Blashill said he believes it should be taken into account that Larkin kept his glove on when punching Joseph.

“I mean, a punch with a glove on - I don’t know, maybe I’m old school - I don’t think I am,” Blashill said. “There’s a lot of punches without gloves on, I think it’s way different if a guy hits a guy with his gloves off than with his glove on.”