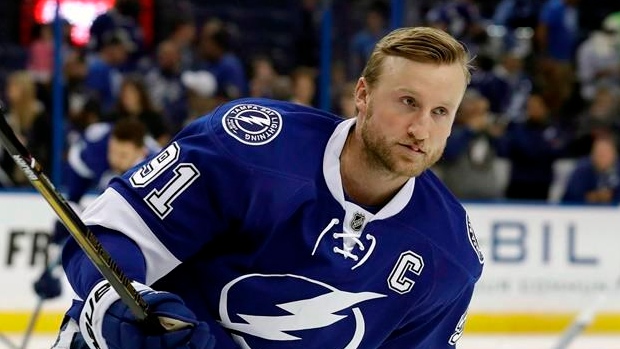 Tampa Bay Lightning forward Steven Stamkos left Thursday's matchup with the Chicago Blackhawks and did not return because of a lower-body injury, according to head coach Jon Cooper.

Per Coop, it is a lower-body injury for Steven Stamkos, who did not play in the second or third periods tonight.

Coop says Stamkos was given the option but wanted to stay on the bench and be there with his teammates. #TBLvsCHI

Stamkos remained on the bench with his teammates and was never officially ruled out for the game, but he did not play in the second or third periods.

"It was good on him. We gave him the option to leave the game and he didn't want to do it, wanted to hang out with his teammates on the bench and cheer them on," Cooper told reporters.

Tampa's head coach did not have any further updates on how much time Stamkos will miss going forward, if any.

Prior to his departure, he had 5:17 of ice time and was held pointless but did record one shot on goal. The Lightning went on to win the game 4-2.

Following the victory over the Blackhawks, the Lightning will be back in action at home against the Anaheim Ducks on Saturday night.