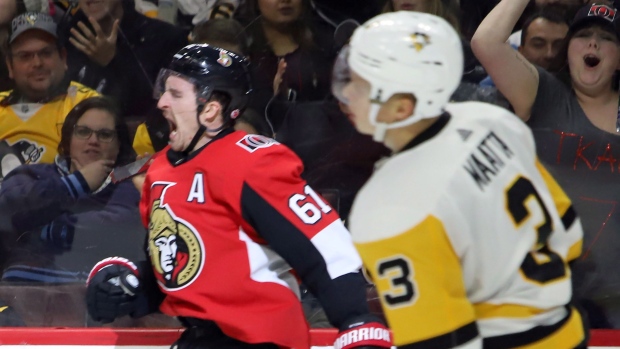 OTTAWA — The Ottawa Senators played with heavy hearts Saturday night, but were determined to give their best effort and finished the night with a 6-4 victory over the Pittsburgh Penguins.

Hours before the puck dropped, the Senators learned of the passing of Mike Foley, their longtime equipment assistant who succumbed to colon cancer.

"He was a great soldier for us for 20 odd years," said Mark Stone, who scored twice.

Former Ottawa general manager Bryan Murray died from colon cancer in Aug. 2017 at 74, and Craig Anderson played the 2016-17 season while supporting his wife, Nicholle, in her successful fight against a rare form of throat cancer.

"It's tough for us. It seems like this disease is doing so many terrible things to this organization."

Matt Duchene, who had a three-point night with two goals and an assist, spoke of the team's desire to honour Foley with a win and coming out with a solid effort against a team of Pittsburgh's pedigree.

"That's a good team that can score goals and they threw what they had at us in the third," said Duchene. "We earned it through the first two and obviously kept going so it was a big win. We lost one of our own (Saturday).

"We're all kind of hurting in here and thinking about his family so it was good to get a win for him."

Brady Tkachuk and Cody Ceci also scored for the Senators (9-8-3), who won their second straight game. Craig Anderson made 31 saves.

Kris Letang, Zach Aston-Reese, Matt Cullen and Patric Hornqvist scored for the Penguins (7-8-3), who are now 1-7-1 in their last nine games. Matt Murray played just one period after allowing three goals on 10 shots. Casey DeSmith gave up three goals on 15 shots in relief.

The Penguins were playing without captain Sidney Crosby, who missed his second straight game with an upper-body injury to the disappointment of the 17,692 at Canadian Tire Centre.

"We can't be sorry for ourselves," said Letang. "We have all the skill in the world, but right now it's not working, so maybe put the puck at the net and make it look a little bit nasty out there."

Murray has struggled this year, but the Penguins faith in his ability has not wavered according to their coach.

"He's a human being and he's a proud guy and he wants to do well," said Penguins coach Mike Sullivan. "Sometimes when you get in these types of circumstances, sometimes you can try a little too hard and it gets him away from just doing instinctual play. There's always that fine line of trying, but making sure you don't try too hard because that can be counterproductive."

After struggling through the first two periods and finding themselves down four goals, the Penguins were able to score early in the third when Aston-Reese produced his first of the season, and shortly after Cullen jumped on a loose puck to cut the Senators lead to 5-3.

Bad third periods have cost the Senators this season and holding off the Penguins, despite a solid push, was a huge confidence builder.

"They came with pressure and forced us to bare down a little bit more than we were expecting," Stone said. "Overall I thought we played a pretty good 60-minute effort."

The comeback effort was short lived as Drake Batherson fed Duchene, who broke in alone and beat DeSmith through the legs to make it 6-3.

With just under four minutes remaining the Penguins pulled DeSmith and were able to take advantage as Hornqvist tipped a Phil Kessel shot past Anderson.

Trailing 3-1 the Penguins started the second with DeSmith in goal, but he didn't fare much better as the Senators scored twice more.

Stone picked up his second of the night on a short-handed breakaway as he picked off an Olli Maatta pass. Less than a minute later Ceci took a pass from Duchene and fired a wrist shot to make it 5-1.

With an assist on the play Duchene picked up his 500th NHL point.

"I think 500 is a big one," said Duchene. "I feel lucky to have played this game as much as I have already and play in this league. I wake up every day and love what I do."

Ottawa jumped out to a 3-1 first-period lead.

The Penguins opened the scoring with a power-play goal as Letang fired a shot through traffic, but less than three minutes later Ottawa tied the game when Tkachuk buried a Colin White rebound into a wide-open net.

Ottawa took the lead as Stone tipped a Thomas Chabot slapshot and Duchene made it 3-1 with under two minutes remaining in the period.

Notes: Ottawa's Max McCormick and Christian Jaros were healthy scratches. Derick Brassard returned to the Penguins lineup after missing nine games with a lower-body injury. Brassard made his return to Ottawa for the first time since being acquired by Pittsburgh Feb. 23.