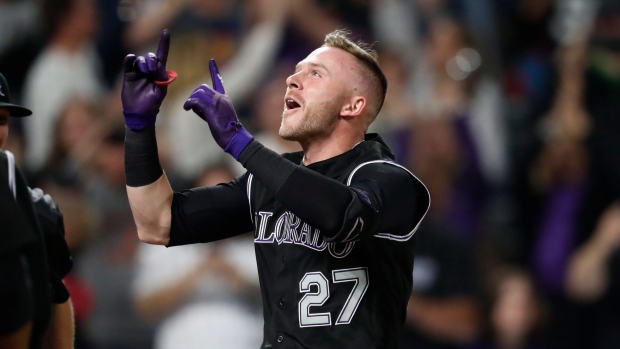 DENVER — Trevor Story did a little fist pump after his seventh-inning shot. Just a way to commemorate becoming the fastest shortstop to reach 100 homers.

His 101st in the ninth? Now that was celebrated with a lot more gusto.

Nolan Arenado also went deep twice in the opener of a season-long, 10-game homestand. Scott Oberg (2-0) had two strikeouts in a scoreless ninth to earn the win.

Story lined a 2-2 slider from Mychal Givens (0-3) over the wall in right field to ignite the festivities at home plate. It was Story's second career game-ending homer.

With his long ball in the seventh, Story became the quickest shortstop in major league history to reach 100 homers (448 games). He bettered Álex Rodríguez, who reached 100 homers in 470 games.

"It's pretty special to me," Story said.

Trailing 6-3 in the seventh, the Rockies tied it up when Story and Arenado hit back-to-back drives off Shawn Armstrong. Story's homer got the crowd fired up — and Arenado, too. Arenado belted the next pitch for his second solo homer of the game. He let out an exhilarated roar.

Keon Broxton made an instant impact with a two-run homer on the first pitch he saw in his Baltimore debut. His blast off Jeff Hoffman in the second inning travelled an estimated 474 feet and landed on the left-field concourse.

The Orioles acquired Broxton from the New York Mets on Wednesday for $500,000 in 2019-20 international signing bonus pool allotment. Broxton was designated for assignment last week by the Mets after batting .143 in 34 games with no homers and two RBIs.

"I was actually going to bunt," Broxton said. "Out of the corner of my eye I saw Arenado back and then a couple of seconds before the pitch came I saw him creeping up I thought, 'I'm swinging right here.'"

"It's concerning," manager Brandon Hyde said. "It's a little bit of a rough patch for our bullpen."

The Orioles will be missing a few coaches this weekend while they attend graduation ceremonies for their children. Pitching coach Doug Brocail was scheduled to miss Friday, while bullpen coach John Wasdin is expected to miss the weekend series.

Rookie infielder Brendan Rodgers played his first game at Coors after making his major league debut on the road. McMahon gave him a tour to show him where things like the lunch room and the batting cage were located.

"It was like a first day at school for me," Rodgers said.

Rodgers had about 22 family and friends at the park. He had two hits, including a run-scoring single, and made a catch along the right-field railing before flipping into the stands. He also got thrown out at third in the eighth.

Colorado's lefties had four hits off Means. Entering Friday, the left-handed Means had allowed a total of four hits to left-handers all season. ... The Orioles' fathers accompanied them on the trip. ... Hoffman was recalled from Triple-A Albuquerque to make the start. Hoffman lasted five innings and surrendered five runs. ... Colorado scored six of its runs with two outs. ... The Orioles' last victory at Coors Field was June 20, 2004. In that game, they rallied for a 4-2 win when Brian Roberts hit a ninth-inning grand slam.

Rockies lefty Kyle Freeland (2-5, 6.02 ERA) starts Saturday as he tries to break out of a slump. Freeland has allowed 22 earned runs over his last five outings. The Orioles will throw righty Andrew Cashner (4-2, 4.14 ERA).