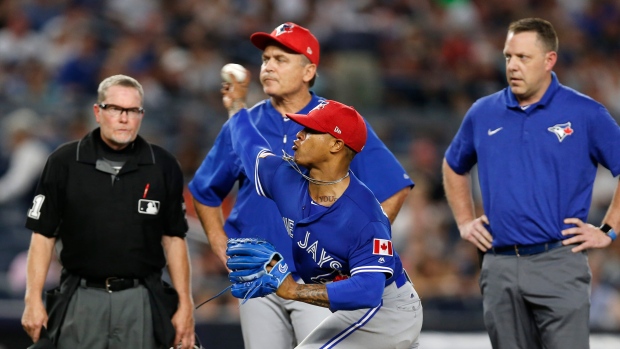 NEW YORK — Toronto Blue Jays right-hander Marcus Stroman had to leave Monday's game against the New York Yankees after five innings with a blister on his right ring finger.

Stroman, the second Blue Jays pitcher to suffer a blister on his finger this season, appeared bothered after throwing a pitch in the fifth inning. Toronto's trainer went to the mound to check on the 26-year-old but Stroman stayed in to finish the inning. He did not return for the sixth.

"I've never had a blister ever in my life, nothing remotely close to having a blister — it's crazy," a visibly upset Stroman said after the game. "It's extremely frustrating. I feel it's an epidemic happening around the big leagues now, a bunch of pitchers having blisters, guys who have never had blisters before. So for MLB to turn their back on it it's kind of crazy.

The Blue Jays' pitching staff has been riddled with injuries this season, including blister and fingernail problems that have limited right-hander Aaron Sanchez to just five major league starts.

Sanchez developed the blister during spring training and has pitched only 24 1/3 innings for Toronto this season. The 25-year-old also received treatment in April to remove part of his fingernail in hopes the procedure would stop the blister from re-forming.

Sanchez returned to the big league team on Monday after pitching 4 1/3 innings in a rehab start with triple-A Buffalo on Sunday. He's expected to start for Toronto against the Houston Astros later this week.

Stroman wouldn't elaborate when asked why he thinks blisters have been a problem for pitchers this season.

"That was the best I've felt all year," Stroman said. "I feel like I've honestly hit my stride right now. I feel the strongest I've been all year. So to come out at that point when I feel like I was rolling, it was pretty frustrating."

Stroman said he hopes to make his next start against the Astros.

"I'll be back out there in five days," he said. "Obviously do everything I can to get my body ready and then on the finger side, let it heal up and hopefully it gets to where it needs to be for my next start."