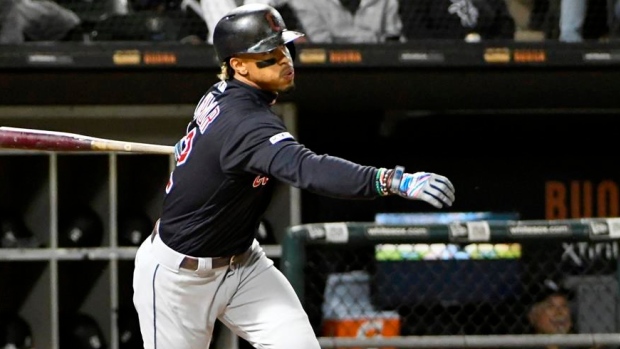 TORONTO — When Toronto Blue Jays’ decision-makers starting rebuilding the roster back in 2017, they likely envisioned something close to this point.

A major-league lineup filled with internally developed kids who have yet to reach their ceilings, a minor-league pipeline that Baseball America still considers the fourth-best in all of baseball, and resources to spend in free agency.

It’s an enviable position to be in and opens up the entire playbook for GM Ross Atkins in the coming weeks.

The trades the Jays have made over the past couple of years have been one of two things: tearing down or mostly tinkering.

That could change soon, as the Jays are as well positioned as any team to make a blockbuster trade and finally use the prospect pipeline they’ve poured so many resources into as a way to acquire major-league talent.

“One of the most encouraging feelings and things we’re hearing from other teams is we have the farm system to make those trades, if it presents itself,” Atkins said last week.

While Nate Pearson, still the team’s top prospect because he didn’t surpass the rookie innings threshold this season, isn’t going anywhere, the consensus Nos. 2 and 3 prospects in the system, infielders Austin Martin and Jordan Groshans, would allow Atkins to pull off any trade he wants.

But the Jays aren’t going to completely empty the farm system, either.

If the Blue Jays use the trade market to acquire a position player, it’s likely because their top targets in free agency decided to go elsewhere or someone is simply too good to pass up, aka Francisco Lindor.

“In free agency, it’s not just the top dollar that wins,” Atkins said. “Oftentimes, it is and sometimes it may be, but there’s a lot of factors and variables that go into it.”

On the other hand, rotation improvements could come in the form of a trade, and there’s definitely one arm available in Texas Rangers right-hander Lance Lynn that could be defined as a considerable upgrade.

There’s also a handful of other names – Dylan Bundy, Jon Gray, Eduardo Rodriguez, Lance McCullers Jr., Carlos Carrasco, Kyle Hendricks – that are currently thought to be in the “available” bucket early on this off-season.

While the Jays could decide to hold off this winter and look to use prospect capital at next year’s trade deadline if they’re in contention, there’s a growing sense they’re open to something splashy, as long as it fits with the long-term plan and doesn’t sacrifice the ability to build a sustainable winner and not just open a two- to three-year window.

“We feel that we’re on a good path towards having one of the stronger rosters in baseball,” Atkins said. “We’re not there yet, but we’ve made some steps towards that.”

Unless you’re in love with prospects who may never even scratch the ceiling of Lindor or you can’t imagine Bo Bichette playing anywhere but shortstop, there’s very little argument against trading for this superstar.

Yes, you’re going to give up prospects and, yes, you have to pay him a boatload of money because you’re not making the trade and letting him walk at the age of 28, but he’s the entire package on and off the field and a legitimate superstar just entering his prime.

It will take a package of not just prospects but big-league talent, as well, so it’s a deal that has a lot of moving parts that need to come together in order for it to happen.

Not only is Lynn a logical target for the Jays to help upgrade the rotation, the three-year, $30-million deal he signed with the Texas Rangers prior to 2019 is exactly the type of free-agent success story Atkins would love to find.

Prior to 2019, Lynn was a perfectly fine mid-rotation starter whose main attribute was durability.

The past two seasons, however, Lynn has boosted the strikeouts, cut the walks and generally looked like a top-of-the-rotation starter, posting a combined 3.57 ERA and 8.3 fWAR over the past two years.

Lynn is owed just $8 million in the final year of his deal and should fetch the Rangers a solid prospect package.

It makes no sense for the Jays not to target Lynn.

Whether they’ll pay the prospect price for one year of control is another story, but a top three in the rotation of Hyun-Jin Ryu, Lynn and free-agent signing X would be a big upgrade on last year’s group.

How are two star third baseman being paid huge money in the buy-low category? Because the only way Atkins should consider either due to the contract landmines approaching is if the trade price is discounted.

Bryant, his service time grievance now settled, will be a free agent after next season and slashed .206/.293/.351 in 34 games this past season.

Arenado, who can opt out of the $260 million deal he signed last year next winter and join Bryant on next winter’s free-agent market, didn’t fare much better, hitting .250/.303/.434 with eight homers in 48 games.

It’s hard to imagine the Jays giving up what the Cubs or Rockies would be asking for in exchange for a whole lot of uncertainty, both contractually and performance-wise.

But if they’re cheap, either player would fill a clear short-term need for the Jays at the hot corner.

If you read the column on how the Jays are likely to go about building their bullpen, you’d think this is unlikely. And it probably is.

The only reason the Milwaukee Brewers are taking calls on one of the most-dominant relievers in baseball over the last three seasons is because there’s an off chance someone overpays.

It could also have something to do with the fact Hader just posted the highest ERA of his career, 3.79, and most of his numbers trended in the wrong direction during the shortened season. It was also just 19 innings.

In a more likely scenario, this is the type of acquisition the Jays would look at next July at the trade deadline if they’re in contention.​