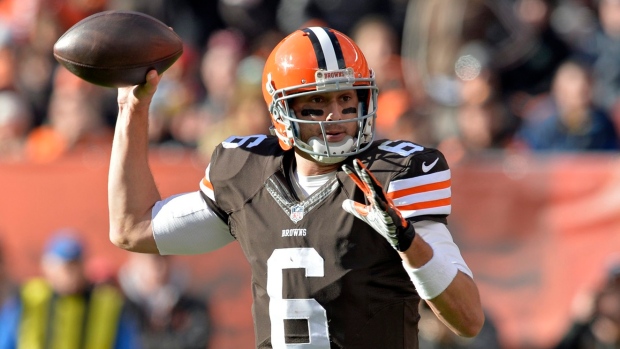 BEREA, Ohio - The switch at quarterback for the Browns appears inevitable this week.

Johnny Football may be about to take over Cleveland's offence.

After Brian Hoyer played poorly again in Sunday's loss to Indianapolis, Browns coach Mike Pettine seemed to be on the verge of giving rookie Johnny Manziel his first NFL start against Cincinnati.

"I think it's natural to lean the other way, given the results," Pettine said Monday. "I still want to make sure we do our due diligence and talk to everybody involved."

Pettine was unclear on if he had already decided to make the change and promote Manziel, the high-profile backup who came off the bench and replaced a struggling Hoyer in the fourth quarter two weeks ago in Buffalo. Pettine, who stuck with Hoyer last week because he had the Browns in the playoff mix, said he wants to meet with his coaching staff and general manager Ray Farmer before telling both quarterbacks and announcing who will face the Bengals.

Pettine said the offensive problems in Sunday's game were deeper than the quarterback, but he called the Browns' passing attack "sub-standard." Pettine cited dropped passes, receivers running wrong routes and execution as factors but that Hoyer has to play better.

"We're in a results business. We've lost two in a row. We all know what the numbers have been in the pass game. For us to be successful, they need to improve."

The Browns (7-6) blew a 14-point lead in the third quarter, when Hoyer and Cleveland's offence failed to get a first down in three straight series.

Pettine said Manziel would "absolutely" be ready if called upon to make his first start. Pettine said nothing is giving him pause to go with the first-round pick.

"I'll fall back on what I've said all along. We pull together the circumstances that we have, just like we did last week. Who gives us the best chance to win?" Pettine said. "That's the decision we go with. To this point, it's been Brian."

Pettine was peppered with questions about Manziel's dedication and if he worked hard enough to warrant the promotion. Since he was drafted, there have been questions about Manziel's commitment, with much of the scrutiny stemming from off-the-field behaviour. Manziel's penchant for partying and late nights became an issue a few weeks ago when he was involved in a 2:30 a.m. scuffle at a downtown hotel where he lives.

On Sunday, Manziel didn't arrive at the stadium until shortly before 11 a.m. for a 1 p.m. kickoff. However, Pettine said Manziel was "on time" and he had no issues with Manziel attending a Cavaliers game last week when some felt he needed to have his nose in the playbook.

Hoyer's freefall has been striking. He has thrown just one touchdown pass and eight interceptions in the past four games, a slide that has damaged the Browns' hopes of making the playoffs for the first time since 2002.

"It's crazy how fast things change," said Hoyer, who is in the final year of his contract. "I feel like four or five weeks ago we're talking about contract talks and now we're talking about if I'm even going to be staying here. It's the furthest thing from my mind right now."

Hoyer doesn't think he's playing any differently. He bemoaned missed opportunities against the Colts, especially on long passes in which he overthrew receivers Josh Gordon and Taylor Gabriel. Hoyer, too, says others need to play better around him.

NOTES: Browns S Tashaun Gipson has begun running and believes he'll play again this season after missing two games with a strained knee ligament. Gipson was leading the NFL in interceptions when he got hurt. ... Pettine said Hoyer's first interception on Sunday was because TE Jordan Cameron ran the wrong route. ... Pettine expects C Ryan Seymour to start for the second straight week. He made his starting debut against the Colts.

(A previous version of this story incorrectly said the Browns had a 21-point lead. They were ahead 21-7 in the third quarter).