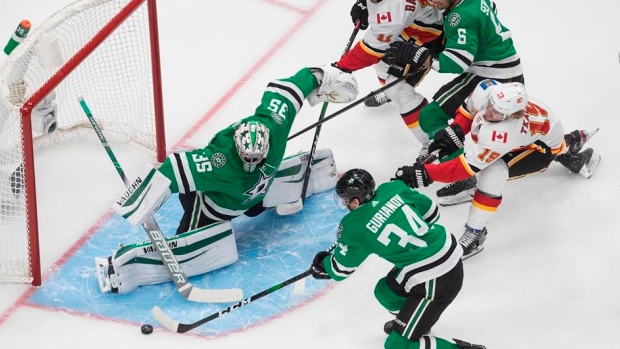 If you have watched any of the Dallas Stars and Calgary Flames series, you’ve seen a streaking Tobias Rieder making his presence felt on the penalty kill. The speedy Calgary winger has tortured the Dallas power play all series long, with his three shorthanded goals already tying a league record.

In many ways, this special teams dynamic in the Stars-Flames series is a microcosm of what we have seen so far in the 2020 Stanley Cup Playoffs. In a little less than 1,000 power-play minutes since the return-to-play format launched, teams are scoring just over six goals per 60 minutes of play on the power play. That’s a 16 per cent decrease in production, and it has enveloped the majority of the league.

That reversal is noteworthy because of what we saw during the regular season. Part of the league’s recent increase in scoring has been driven by an increase in power-play scoring, particularly in the past couple of seasons: 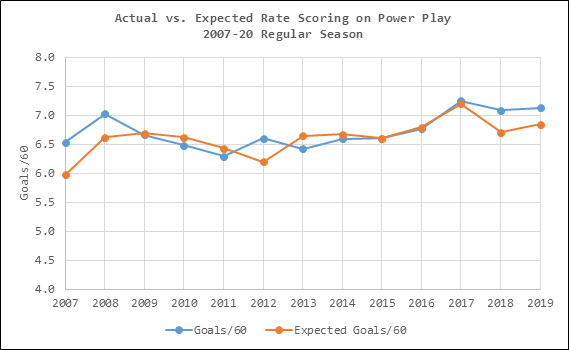 We know why power plays have trended better over time – teams have become smarter about how they allocate resources, like regularly deploying a four-forward lineup over the traditional three-forward, two-defencemen setup.

We also know teams are more privy to effective power play principles, such as gaining the offensive zone with control and more recently, trying to create passing lanes to dangerous areas from behind-the-net play. Add that to a surge in individual shooting talent, and you have a recipe for an increase in scoring.

So what gives with this postseason? Let’s look at the same exact graph but trended over postseason data. The data may be a bit sample-limited for the 2019-20 season, but note how expected goals have dropped collinearly with real goal scoring: 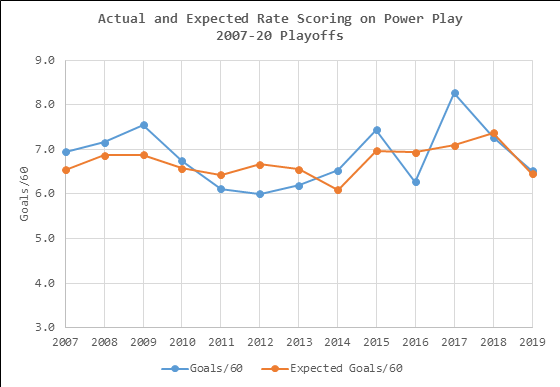 Power-play goal scoring and expected scoring have returned to what we saw in the earlier parts of this decade before scoring spiked league-wide. Although the trend may seem flat, we know it shouldn’t be – regular-season scoring at both even strength and on the power play has spiked considerably in the past couple of seasons.

Of the 24 teams that entered the playoffs, only four – Nashville, Calgary, Vancouver and Florida – have materially improved on their regular-season power play production. The rest of the league is either flat or considerably down. Perhaps the most notable example concerns the Philadelphia Flyers, who have managed to score just one power-play goal – a Jakub Voracek goal in the opener against Montreal – this entire postseason: 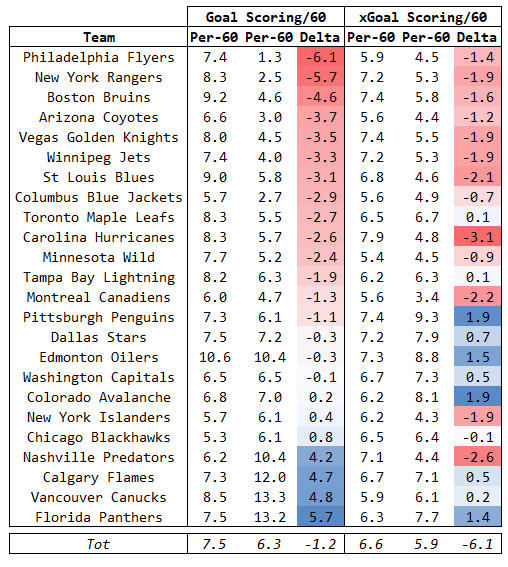 Absent randomness being a contributing factor (and to some degree it surely is), what explains what is going on this postseason? This is where video analysis really comes into play.

To my eye, especially in the group of 16 play, offensive zone puck movement seems much less efficient. We are seeing more of skaters individually carrying the puck around the zone. As a result, sequential passing to open up shooting lanes and spur goaltender movement has been hard to find.

Today’s NHL goaltenders are simply too large and too athletic to push out of position merely off of stickhandling, and shots from the point with limited traffic in front are turned aside with ease. (When I think of high-end offensive zone puck movement, I often recall this Ilya Kovalchuk goal during New Jersey’s 2011-12 Stanley Cup bid.)

You also have to wonder if rust and conditioning are factors merely because of the five-month layoff.

It will be interesting to see if this continues beyond the first round, especially with some of the league’s most prolific power plays from the regular season still in contention. Vancouver and Calgary have hit the ground running. The rest of the league? Not so much.