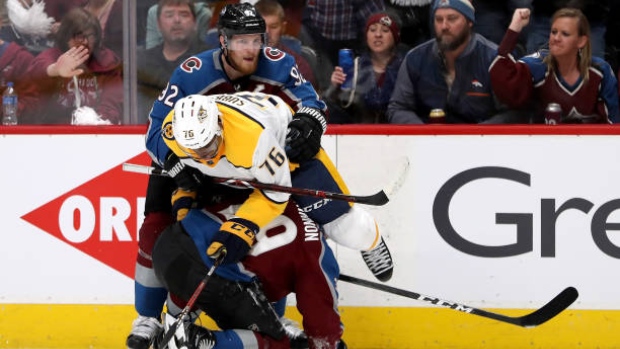 P.K. Subban's most notable moment of the Nashville Predators' first-round series against the Colorado Avalanche may have come when he appeared to punch Nathan MacKinnon in the side of the head during Game 3.

Subban, who said he'd do it again if he got the chance ahead of Game 4, threw his support behind MacKinnon for the Hart Trophy on Sunday night after the Predators eliminated the Avalanche in Game 6.

"You know what, he's in my opinion – and you know I'm biased about (Pekka Rinne) – but in my opinion he was the best player in the league this year," Subban told the Tennessean. "And that's not to take anything away from other guys like Taylor Hall who have had great years, but I think for him and what he's done with this team, a team that's been up and down since they brought in the new coach, he's done a great job.

"He's just come into his own, and he's a phenomenal hockey player. And you know, he's so tough to handle, so fast and strong and shifty. My expectations for him as a player is to be a Hall of Famer at the end of his career, and I think he understands that. But just tremendous respect for him and I told him that I hope he takes home that trophy that he deserves as the MVP."

MacKinnon scored a career-high 39 goals and added 58 assists in 74 games during the regular season. He finished fifth among all players in points with 97, behind Connor McDavid, Claud Giroux, Nikita Kucherov and Evgeni Malkin.

As Subban noted, MacKinnon was at the forefront of a significant turnaround for the Avalanche, who made the playoffs this season after finishing last in the NHL last year.

MacKinnon scored three goals and posted six points in six games against the Predators in the playoffs. Subban, named a Norris Trophy finalist last week, posted three assists and praised the Avalanche as a whole on Sunday night.

"I don't care what seed they were; that's a very, very good hockey team that could beat anyone in the playoffs right now," Subban said. "They're well-coached, and he's [Jared Bednar] done a tremendous job this year with that group. They have so many young players that are really going to have great careers in this league. I think for us, we knew they were a good team, and I think we gave them the respect they deserved. I don't think there was a moment where we didn't respect them. I think that's why we came out on top. I think if we would have ever taken them lightly, maybe we'd be playing another game."

The Predators will meet the Winnipeg Jets in the second round.