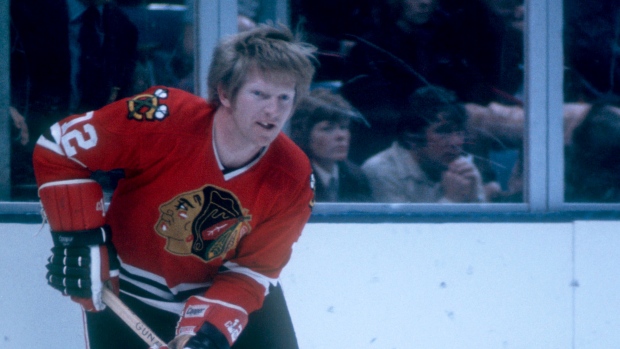 TORONTO — Pat Stapleton, a longtime NHL defenceman who famously kept an air of mystery over whether he possessed the puck from the goal that won the 1972 Summit Series, has died. He was 79.

The Strathroy Rockets, a Greater Ontario Junior Hockey League team that Stapleton was involved with, said on their website the former Chicago Blackhawks blue-liner died Wednesday night. A cause of death was not provided.

"We are saddened to hear of the passing of Pat 'Whitey' Stapleton," the Ontario Hockey League's Sarnia Sting, who play in the city of Stapleton's birthplace, posted on Twitter. "Along with his many hockey accomplishments Pat served as honorary captain when the Sting hosted the OHL all-star and (CHL Canada/Russia Series) games.

"A local hockey icon and fantastic human being, he will be missed by many."

Stapleton was on Canada's Summit Series team in 1972 and is alleged to have claimed the puck from Paul Henderson's series-winning goal over the Soviet Union in Game 8.

Stapleton was usually coy when asked whether or not he indeed had what would be one of the most famed souvenirs in hockey history.

"They say I have it. We'll keep that one going for a while," Stapleton told the Toronto Sun in 2012. "I'm not sure if people think it's a different colour or has a hole in it. It's a puck."

The dependable defenceman represented Canada again at the 1974 Summit Series, serving as team captain. That series was won by the Soviet Union.

"Hockey Canada sends its condolences to the friends and family of Pat Stapleton. Few loved the game quite like Whitey, who was so proud to wear the Maple Leaf in the 1972 Summit Series and again in 1974 as captain. His infectious personality will be missed," said Tom Renney, CEO of Hockey Canada.

Born July 4, 1940, Stapleton began his NHL career with the Boston Bruins in 1961–62. Initially signed by the Chicago, Stapleton was claimed by Boston in the 1961 intraleague draft.

After splitting time between the Bruins and minor-league teams, Stapleton eventually ended up in Chicago, where his career took off. He played eight seasons with the Blackhawks from 1956-66 to 1972-73, helping the team to Stanley Cup final appearances in 1971 and 1973.

"The Blackhawks express our deepest sympathies to the family, friends and teammates of Pat Stapleton, who passed away last night. As a former team captain and member of the Blackhawks Alumni Association, Stapleton’s contributions to the organization will forever be remembered," the Blackhawks said in a statement.

Stapleton signed a five-year deal to become a player/coach with the Chicago Cougars of the World Hockey Association in 1973. He won the Dennis A. Murphy Trophy as the WHA's top defenceman in 1973–74.

After the Cougars folded following the 1974–75 campaign, Stapleton was claimed by the Indianapolis Racers, where he played for two seasons. He suited up for one final season with the Cincinnati Stingers before retiring in 1978.

Stapleton returned to Indianapolis the following year as head coach, taking on a team that included future NHL legends Wayne Gretzky and Mark Messier. His time coaching the eventual Hall of Famers was short-lived, as the Racers folded 25 games into the season.

He added 27 goals and 212 assists in 372 WHA games with Chicago, Indianapolis and Cincinnati.

This report by The Canadian Press was first published April 9, 2020.