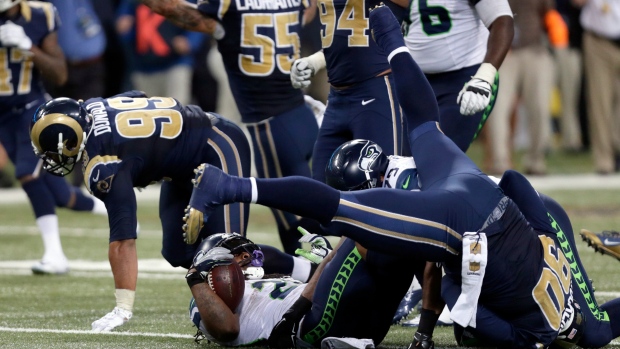 The Seattle Seahawks had 224 days to think about their final offensive play call of the postseason before finally kicking off against the St. Louis Rams on Sunday.

With their off-season consumed with questions as to why the team didn’t hand the ball to Marshawn Lynch on the one-yard line with less than a minute left to play in Super Bowl XLIX, the Seahawks made sure not to repeat their same mistake to open the 2015 season.

Needing a half-yard to continue overtime down 34-31, the Seahawks once again lined up in the shotgun, but this time the ball went to Lynch. The result, however, was the same - failure.

Predicting the play call, just as New England Patriots cornerback Malcolm Butler had in February, defensive tackles Michael Brockers and Aaron Donald shot into the backfield, hitting Lynch and tackling him for a one-yard loss to end the game.

"We were thinking run," Donald said. "It's short yardage and we know they've got Lynch back there and we knew they were going to give it to him."

Just like that, for the second time in as many meaningful games, the Seahawks were left dumbfounded with the result of their final offensive play.

"I don't know how they got the penetration,” Seahawks head coach Pete Carroll said after the game, “but they did.”

The comments seemed eerily similar to those of Carroll in Glendale, Arizona after the Super Bowl loss. 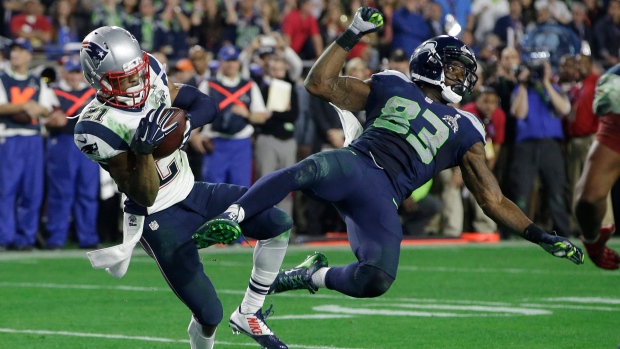 Unfortunately, with the play that we tried to execute,” Carroll explained after the 28-24 loss to the New England Patriots, “the guy makes a great play and jumps in front of the route and makes an incredible play that nobody would ever think he could do. And unfortunately that changes the whole outcome.”

A failure to execute on Sunday with the ball in Marshawn Lynch’s hands will hardly ease the pain from the Seahawks’ third Super Bowl appearance. This play call came against a dominant defensive line, and one, as Donald pointed out after the game, that was expecting to see a run play – as we all once again were.

The Seahawks regressed along their offensive line in the off-season, losing centre Max Unger and guard James Carpenter, and improved in the passing game with the additions of tight end Jimmy Graham and receiver Tyler Lockett. Perhaps, this was the time for the Seahawks to pass in order to safely pick up a yard.

Yet, if the Seahawks attempted a pass, even to the newly-acquired Graham, and failed, Carroll and offensive coordinator Darrell Bevell would be pressed as to why the failed to learn a simple lesson from the biggest loss of their respective careers.

Now, after another demoralizing loss with the ball once again in the hands of their offence, the Seahawks are left searching for answers. The two-time defending NFC champions don’t have much time to find them. The Seahawks will now play four playoff teams from 2014 in their next five games, starting with the revenge-seeking Green Bay Packers on Sunday night.

Jones picks up where he left off with Packers 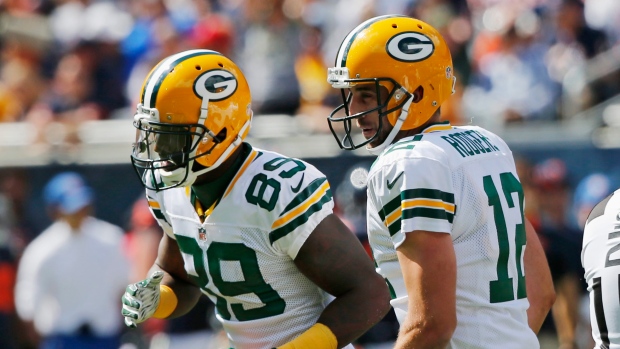 The Packers were left with plenty of question marks when Pro Bowler Jordy Nelson tore his ACL in Week 2 of the preseason. James Jones provided an answer on Sunday.

Signed just seven days earlier by the Packers after being cut by the New York Giants, Jones hauled in two touchdowns as he worked in Nelson’s spot against the Chicago Bears. 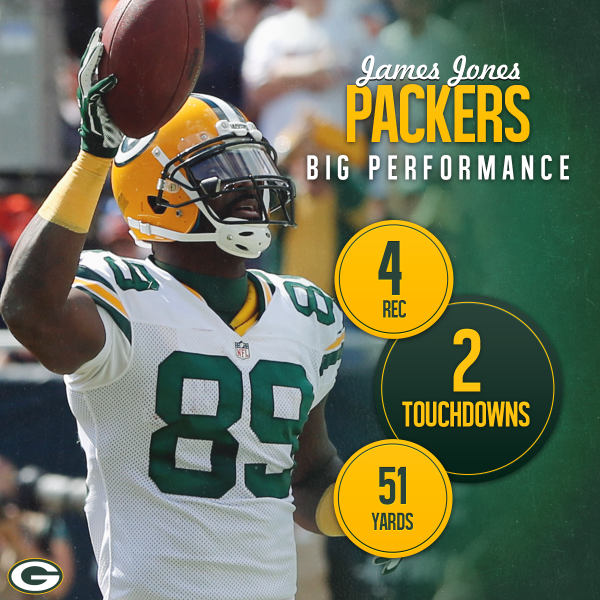 Jones’ emergence allowed Randall Cobb to return to his slot position in three-wide receiver sets, with Adams also working on the outside.

Expected Nelson replacements Ty Montgomery and Jeff Janis were both held without a catch in the 31-23 win.

Jones will likely be looked upon to play an even larger role in Week 2, as the Seahawks are likely to latch Richard Sherman on to Cobb.

The news was not all good for the Packers, however, as the team allowed 141 rushing yards to Matt Forte and another 31 to quarterback Jay Cutler. The team will now face a more dangerous combination in Lynch and Russell Wilson of the Seahawks in Week 2.

Perhaps, the Seahawks and Lynch will finally face a dream scenario with the game on the line next Sunday. 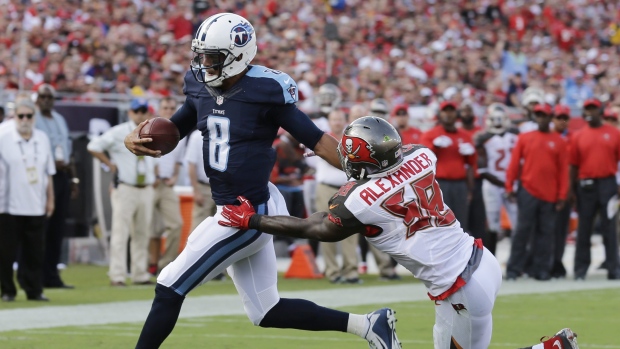 Marcus Mariota missed on just three throws – two of which came on his first two attempts – and posted a perfect passer rating in his four-touchdown debut victory over the Tampa Bay Buccaneers.

Mariota, the second overall pick in the 2015 draft, torched the Bucaneers defence in possibly the greatest quarterback debut in history.

Mariota is the 1st player since at least 1933 with a perfect passer rating in his 1st game (minimum10 attempts).

Jameis Winston, selected ahead of Mariota, had a far less impressive debut, throwing a pick-six on his first professional passing play. Winston averaged just 6.4 yards per pass and added another interception to equal his touchdown mark.

One bright spot for the Buccaneers was the play of second-year tight end Austin Seferian-Jenkins. Seferian-Jenkins, who drew comparisons to Tony Gonzalez from his offensive coordinator Dirk Koetter in the offseason, hauled in five passes from Winston for a career-high 110 yards and two tocuhdowns.

The 22-year-old tight end should remain Winston’s go-to for as long as receiver Mike Evans remains sidelined with a hamstring injury.

Houston, we have a controversy 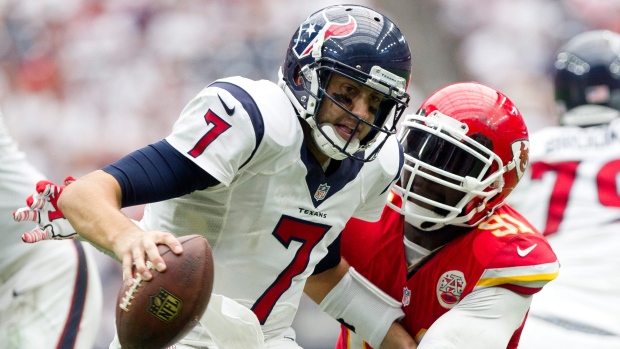 When Bill O’Brien named Brian Hoyer the starting quarterback of the Houston Texans after Week 2 of the preseason, he made it clear he wouldn’t be afraid to make a switch during the season.

That switch came Sunday, trailing 27-9 with less than six minutes remaining against the Kansas City Chiefs. Backup Ryan Mallett entered and led two scoring drives to give the Texans a shot to recover an onside kick down 27-20 with a minute left.

Hoyer’s worst moment came early as he threw an interception on the Texans’ first offensive play. The pick gave the Chiefs the ball on the Texans’ 13-yard line and set them for a touchdown two plays later. He also turned the ball over on a strip-sack by Justin Houston.

O’Brien refused to commit to starter after Sunday’s loss, which is likely worse news for Hoyer than Mallett.

Just one week into the season, the Texans’ quarterback battle from training camp is back on. 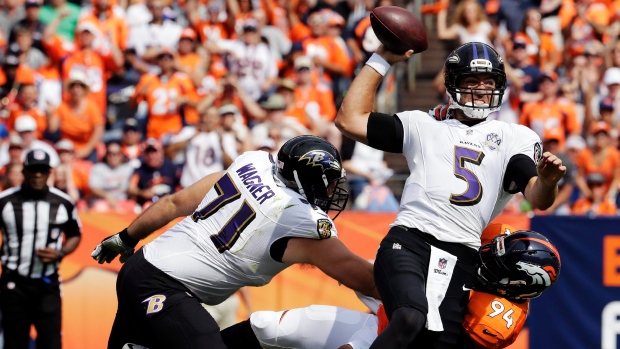 Peyton Manning’s struggles against the Baltimore Ravens stole the headlines leaving Mile High Stadium on Sunday, but it was Joe Flacco who had the worse day of the two.

Flacco completed 18 of 32 passes for 117 yards - a woeful average of 3.7 yards. Flacco failed to find consistency with any target in the passing game as no Ravens receiver topped 25 yards and the entire offence failed to post a touchdown.

A third-quarterback pick-six cost from Flacco cost the Ravens the lead and a last-minute interception in the endzone sealed the game. Flacco looked for his top target, Steve Smith, in the endzone one play before the interception, but the veteran dropped a potentially game-winning pass.

The Broncos defence is an above average unit and a tough measuring stick, but Flacco and the Ravens will have to improve significantly to contend for an AFC North title in 2015.

The Ravens will look to improve on their 173 total yards against the Oakland Raiders in Week 2. Their division rival Cincinnati Bengals torched the Raiders for 33 points and 396 yards.

The Ravens are in desperate need of first-round pick Breshad Perriman, who remains sidelined with a knee injury. In the meantime, Flacco will have to find a way to make due with one of the NFL’s weakest receiving corps.