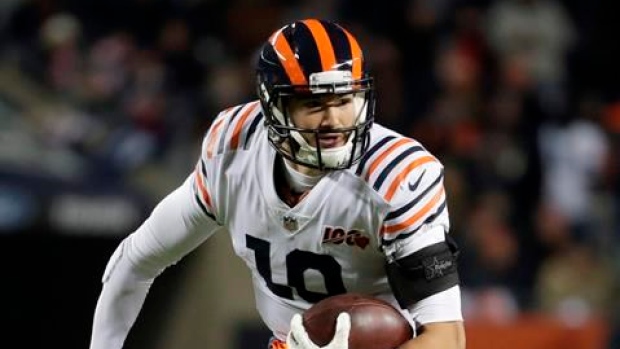 The oldest rivalry in the NFL will be renewed on Sunday Night Football on TSN.

The Chicago Bears, which have lost four straight, will travel to Lambeau Field to take on the 7-3 Green Bay Packers.

The NFC North-leading Packers are fresh off blowing a 14-point lead in Indianapolis en route to a defeat, while Chicago last played on Monday Night Football back in Week 10.

The Bears put up just 13 points on that night, in an embarrassing home loss to the Minnesota Vikings.

The big news heading into this game is that Mitchell Trubisky will be back under centre for Chicago, as Nick Foles is nursing a hip injury.

The game opened Green Bay -8.5, and can still be found at that number if you shop around.

The total is a measly 44 points, which makes sense since the Bears are one of the worst offensive teams in the league.

Trubisky began the year as Chicago’s starter but was pulled midway through a Week 3 game.

He threw for 560 yards and three touchdowns in two-plus outings, but turned the ball over four times.

Chicago’s offence has been abysmal with Foles at the helm, ranking 30th in passing yards per attempt and last in total touchdowns, so there’s a slight possibility that Trubisky is actually a slight upgrade.

I can’t believe I’m saying that.

The former second overall pick has struggled in five career starts versus the Packers, posting a 1-4 record.

His teams have averaged just 15.8 points in those contests, and he’ll be forced to operate behind a bottom-five offensive line.

The Bears rank 30th in pass blocking and 21st in run blocking according to Pro Football Focus, and Green Bay’s front four is no joke.

Za’Darius Smith, Preston Smith, Kenny Clark and Rashan Gary are all in line for big games, while Trubisky’s turnover problems could set up Aaron Rodgers and company up with prime field position all night.

The Packers rank third in points per game and are PFF’s fourth highest graded offence.

They just hung 31 points on Indy, which is the fifth-ranked defence by DVOA, and put up 30-plus points in seven of 10 contests.

AARON RODGERS ARE YOU SERIOUS!?

The DB had no chance against Davante Adams 😳
(via @thecheckdown)pic.twitter.com/cE8uyD4lm7

Chicago’s strength is its defence, which has graded out third against both the pass and the run while holding all 10 of their opponents to 26 points or less.

That list of opponents includes the Rams, Saints, Titans and Buccaneers, who all boast top-eight ranked offences by DVOA.

On paper, the Packers should cruise to an easy victory, but unfortunately the game isn’t played on paper.

Weird things happen in the NFL, and unfortunately sure things simply do not exist.

That being said, there is absolutely no way I’m backing Trubisky, especially not on the road, versus a division rival, in a prime time game.

Instead of betting a side or the total, let’s explore another route to take.

Only players with 60+ catches and zero drops

Yes, the Bears have an elite defence.

However, the Packers move him all around the formation to find the best match-up, and there’s no other option that Rodgers trusts more.

Adams has caught at least seven passes in two of his past three meetings versus Chicago, and has seen 34 total targets in those games.

I’m banking on another big outing from him on Sunday night.