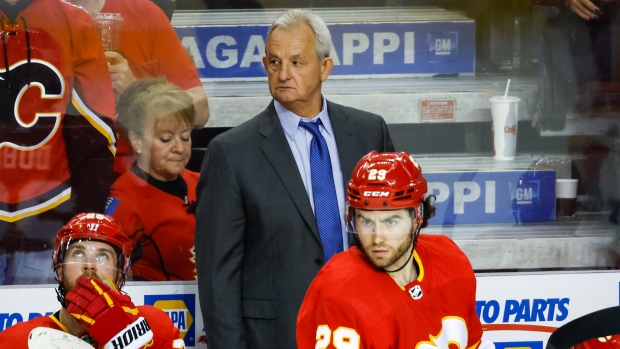 If given the opportunity to vote for the Jack Adams Award, Darryl Sutter would not vote for himself.

The National Hockey League announced the three finalists for the award, presented annually to the coach of the year, on Thursday. Sutter is up against Gerard Gallant of the New York Rangers and Andrew Brunette of the Florida Panthers.

Despite the honour (the two-time Stanley Cup champion with the Los Angeles Kings has never won the Jack Adams but was a finalist in 2004 during his first stint with the Flames), Sutter downplayed the nomination – instead saying he’d rather his team win the William M. Jennings Trophy for fewest goals against.

The Flames rehired Sutter in March 2021 after a season that began with great expectations under Geoff Ward quickly went off the rails. While fans were hopeful that bringing Sutter back would lead to the team making the playoffs that spring, Sutter always had the longer view, readily admitting that he did not think that group would make a run for a postseason berth (they ultimately did not qualify).

Instead, Sutter focused on building good habits and increasing professionalism and expectations.

“You have to have a foundation of accountability and checking and, at the same time, there still has to be freedom for the players in terms of using their skill sets,” he said earlier this season.

Much of that accountability was built during the exit meetings after last year, when he emphasized that players had to show up to training camp in better shape.

“If you’re not a well-trained organization, you won’t make the playoffs,” Sutter said earlier this season. “That’s No.1. It doesn’t matter if you think you’re the best player in the National Hockey League or wherever you think you fit if you’re not well-trained. It’s the one advantage you give yourself every night; you can be one shift better, five per cent energy better, that’s an advantage anyone can give themselves. That’s why guys have bad years that are top guys.”

That message was taken seriously by the players.

According to veteran defenceman Chris Tanev, even routine practices now come with expectations.

“I think coming to work every day and expecting to win, preparing to win, practising to win,” he said in April of how things had evolved in Calgary under Sutter. “I think he’s changed that all dramatically. Every day is a new day. Regardless of what happened yesterday, you move forward and expect to win the next day. When you’re at practice, you’re expected to make tape-to-tape passes, work hard, skate, and then prepare for the next game.”

The Flames had the NHL’s biggest year-over-year increase in points this season. The team finished the regular season third in goals against, sixth in goals for, 10th in power-play percentage and sixth in penalty-kill percentage.

“Individual success within the team concept” is how Sutter summarized his approach – and Flames players achieved plenty of individual success. More than half of Calgary’s skaters (and all six of their regular defencemen) either tied or set new career highs in goals, assists, or total points.

“I don’t think we’ve had a coach like him in Calgary for a long time,” forward Johnny Gaudreau said. “Demanding of their teams, expect a lot out of players…he’s done a great job with our team and brought our group together.”

Sutter’s work in Calgary also caught the attention of players around the league.

“I look at Calgary this year and their coach there, and I don’t know what people say about him, that he might be hard-nosed, but he holds guys accountable there,” Winnipeg Jets forward Paul Stastny said, unprompted, in April when asked what the Jets needed to change going forward.

“You look at those guys there, they play a whole different game than they did last year. They’re a more dangerous team and play a complete team game. When a good team game follows, all the individual success goes along with it.”