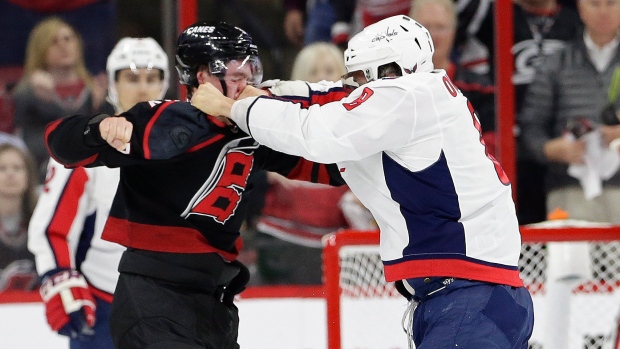 Coach Rod Brind'Amour said Tuesday that he assumes Svechnikov, who was wearing a helmet, will miss Game 4 of the best-of-seven series Thursday night. He added he's "going to be real careful" and is "certainly not going to rush him back."

The two Russians fought with 9:01 left in the first period of Carolina's 5-0 victory in Game 3 Monday night. In the first playoff fight of his 14-year career, Ovechkin floored Svechnikov with a right hook that left the 19-year-old wobbly and in need of help getting to the dressing room.

Brind'Amour said Svechnikov was evaluated at a hospital and "looks normal and said he feels great."

The team recalled forward Patrick Brown from its AHL affiliate in Charlotte on an emergency basis. Brown, who had 19 goals and 16 assists in 70 games in the minors, has one goal and one assist in 28 career NHL games.