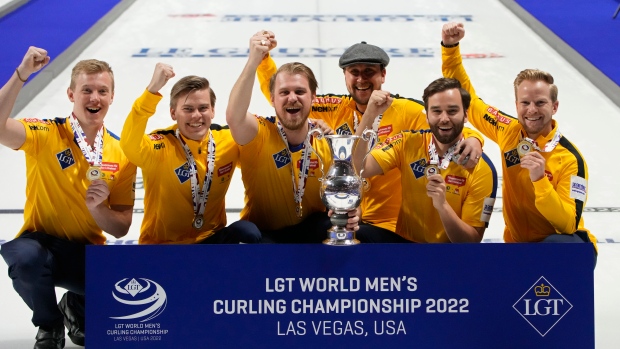 "Just the worst ice I've ever curled on in a major championship," he said. "I've played at some curling clubs that were poor. But not in a world championship."

Gushue dropped an 8-6 decision to Sweden's Niklas Edin in a final where precision shotmaking was difficult. An unpredictable game swung Edin's way when Gushue nosed a blank attempt in the ninth end.

That gave the Swedes hammer in a tied game and they scored a pair in the 10th for their fourth straight world title.

"That game was very tough, difficult conditions to play on," said Edin. "So I’m really happy that we could fight as hard as we did."

Gushue said there were two distinct ridges on the ice in his semifinal win a day earlier. When he arrived for pre-game practice Sunday, he noticed four ridges on the sheet.

Gushue and his St. John's-based team of Mark Nichols, Brett Gallant and Geoff Walker opened the game with hammer but were forced to a single.

Buoyed by a vocal partisan crowd of about 1,000 spectators, the Canadians stole a pair in the second end and were building towards a force in the third when the game turned.

Gushue raised his arms in the air in incredulity when his stone hit a ridge near the far hogline and moved nine or 10 inches the wrong way.

"It really was shock," Gushue said of his reaction. "Pardon my language, but what the (expletive) just happened?"

Sweden took advantage with a deuce and followed with a steal to tie the game.

Edin, who won his first Olympic gold this season, kept the pressure on. He forced Gushue to draw for one in the fifth end and scored two in the sixth after Gushue could only clear one stone on a double-takeout attempt.

"The ice was just so bad that it became a coin toss on every rock," Gushue said. "Unfortunately it came up heads for Niklas a little bit more than it did for us."

Canada's chances of a 10th-end steal were slim but a hogged Walker stone put things into longshot mode.

Gushue, who threw a game-low 62 per cent, said the ice conditions impacted both of his rocks with the game on the line.

A come-around attempt curled "dramatically" after hitting a ridge but was still in a good spot, he said. For his final throw, Gushue tried to draw around two Swedish stones on the top of the four-foot ring.

He said the rock got on the wrong side of a ridge and then ran straight.

"It's embarrassing for a player of my calibre to see two shots that far off when I'm really only taking six inches different ice," Gushue said. "That's hard to swallow. You feel like an idiot even though you threw a good rock."

It was Edin's sixth career world title. He also beat Gushue in the Olympic semifinal in Beijing.

"I don't want our complaining about the ice to come across as discrediting what they did because they're one of the best teams in the world," Gushue said. "They could have beat us on good ice.

"It just took away an experience I think for both teams."

Gushue felt the ice issues were likely caused by the ice crew building up the outside edges of the sheets early in the event.

He added that can make the ice scraper tilt slightly as the buildup continues through the week, digging in on the edge and causing ridges to form.

"The World Curling Federation conducts a review of each championship at its conclusion and puts particular emphasis on the athlete feedback," the WCF said via email.

"The ice and technical aspects of the championship throughout the week are incorporated into this review."

Earlier in the day, Joel Retornaz defeated American Korey Dropkin 13-4 to win the bronze medal. It was Italy's first-ever podium appearance at this event.

Gushue was looking to win his second career world title after topping Edin in 2017 at Edmonton. Edin won the rematch a year later at this same Las Vegas venue.

Without Olympic silver medallist Bruce Mouat of Scotland in the field, Canada and Sweden were heavy favourites to make the final. Gushue and Edin had a few hiccups during round-robin play but were still the class of the 13 entries.

Gushue has enjoyed a remarkable season with a victory at Canada's Olympic trials, a bronze medal at the Olympics and a fourth national title in six years.

However, this game left him disappointed for his teammates as well as spectators and TV viewers who he said "were robbed" of an experience to watch two of the world's top teams battle for gold.

"What they saw was a (poop) show," Gushue said. "Niklas made more than we did and deserved to win. But I would have loved to put on a display, for the two of us to go out and battle like we did at the Olympics (or) the way we have many times at Slams.

"That would have been fun. This wasn't fun."