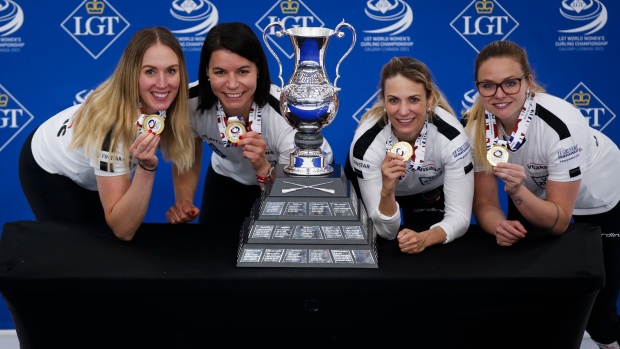 Play in the Calgary bubble wrapped up Sunday with another world women's title for Switzerland. The event also brought a fresh wave of questions about the strength of the Canadian program.

Silvana Tirinzoni successfully defended her crown with a 4-2 victory over Russia's Alina Kovaleva at WinSport's Markin MacPhail Centre. Tirinzoni forced Russia to a single in the eighth end, blanked the ninth and scored one in the 10th end when Kovaleva was light on a freeze attempt.

It was the first time that Canada failed to win a medal at either the women's or men's world championship in the same season.

""I would suggest once again that we are back at a crossroads to try to determine whether we can modify or tweak what we do to make us fractionally more competitive internationally because international results do matter," said Curling Canada high-performance director Gerry Peckham. "They matter on a variety of fronts."

Canada also missed the podium in both four-player events at the 2018 Pyeongchang Olympics. Jennifer Jones skipped the last Canadian team to reach the women's world podium when she won gold that year in North Bay, Ont.

This was the world championship debut for the Bottcher and Einarson teams, and both foursomes struggled at times in round-robin play. Even though the playoff departures were swift, both sides were at least able to secure top-six finishes and Olympic berths for Canada at the 2022 Beijing Games.

There are no easy answers when it comes to Canada's so-so performances over the last few years. Many teams had to deal with a lack of training ice this season and travel limitations prevented normal practice sessions.

But big picture, the days of Canada being a lock for the podium are gone. It's not that Canadian entries are any weaker than before, it's that international competition has improved.

Many top countries put their focus on one or two elite teams, who are able to gain more experience at the highest level. Other programs around the world have also improved to the point where they're in the contender mix as well.

Canada still has several elite teams in men's and women's team curling that can contend for world and Olympic titles. The domestic federation will be looking to make strides where it can to make them even better.

"I would say one of our biggest Achilles, which continues to reveal itself, is that our teams are often located in different cities and/or different provinces," Peckham said. "So the ability to centralize to train is really reduced and challenging.

"When you talk to teams that have experienced both sides of the equation or when you bear witness to what other programs are able to achieve, you realize the significance of centralization within a high-performance program."

Whether Curling Canada is able to make headway on that front before the Games in February is uncertain. But it will likely be an area of focus for future quadrennials.

At least the federation no longer has to worry about the Olympic qualifying event in December. The last-chance event for Beijing looked like a real possibility when Einarson struggled to a 1-5 start.

However, her Manitoba-based team of Val Sweeting, Shannon Birchard and Briane Meilleur rebounded later in the week and finished with a 7-7 record overall.

In Sunday's final, Swiss fourth Alina Paetz helped earn the only deuce of the game in the fourth end after delivering a hit with controlled weight. The Russians had difficulty generating offence against a Swiss side that relied on quality rock placement and penalized errors.

“We just made more mistakes today than yesterday, that was the key to our loss," Kovaleva said. "Yeah we’re happy (with silver), we worked a lot for this result, but next year we’re going for gold."

The game capped the 11-week curling bubble experience, which was by and large a successful endeavour.

Five days of TV coverage were scrapped over the last week after seven members of the event broadcast staff tested positive for COVID-19. A modified broadcast plan was approved and coverage resumed Friday.