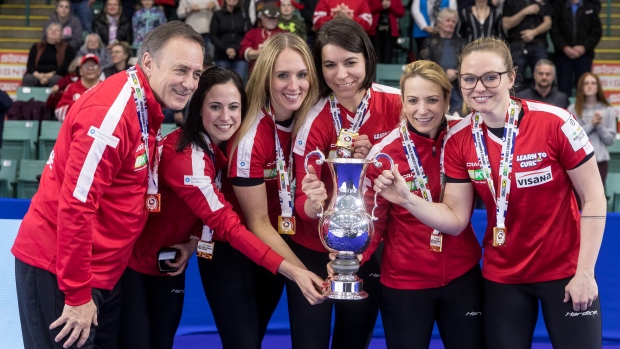 Tirinzoni joined Canada's Jennifer Jones and Rachel Homan to skip the only teams to go unbeaten through all preliminary-round and playoff games.

The Swiss were also the first in the 43-year history of the women's championship to win three consecutive gold.

"To win it once is hard enough, but to win it three times in a row is crazy," Tirinzoni said. "All three of them were tough and so special."

Tirinzoni, Alina Paetz, Esther Neuenschwander and Melanie Barbezat were victorious last year in Calgary and in 2019 in Silkeborg, Denmark.

The championship was cancelled two years ago because of the COVID-19 pandemic.

Tirinzoni, who is coached by Canada's Pierre Charette, posted the best round-robin record in last month's Olympic Games, but lost the semifinal and the bronze-medal game in Beijing.

The Swiss women returned to their country post-Beijing and had to win a national title in order to play in the world championship.

"We had to play eight games to make it to here, but it also showed us we really wanted to go," Tirinzoni said. "We really fought through that nationals.

"Coming here, to be honest, I was thinking the team was maybe a little tired mentally. That was not the case. They were shooting the lights out some times."

Swiss teams have won seven of the last 10 women's world championships. Paetz, who throws fourth stones for Tirinzoni, skipped the team that won gold in 2015.

"I think we have some good individual players and in the past, they found a way to play together," Paetz said. "That's why we always had great teams. We are just hard workers in Switzerland and we know how to practise."