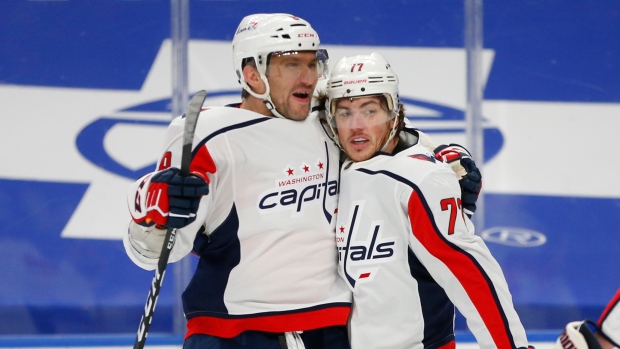 BUFFALO, N.Y. — Pete Laviolette was more pleased for his players — young and old — for kicking off the season on the right foot than he was getting a win in his debut as Washington's coach.

“It is a lot more than just me,” Laviolette said after earning his 638th career win and first in Washington, a 6-4 season-opening victory over the Buffalo Sabres on Thursday night.

“There is a lot more than just me that got changed over and and a lot of new pieces in there, and I think it is really important for our team,” he added. “It’s the start of the season or the start of a new direction and I think guys can really enjoy that.”

T.J. Oshie had a goal and two assists in a game the Capitals never trailed but were in jeopardy of squandering a 4-1 lead before Jakub Vrana scored 46 seconds into the third period.

Vrana stripped Eric Staal of the puck in front of Buffalo’s net and beat Carter Hutton on the glove side with a goal that came 26 seconds after Jake McCabe cut Buffalo’s deficit to 4-3 by roofing a shot from the right point.

“It could happen to anyone and it just ended up on my stick,” Vrana said of Staal’s turnover. “I felt like it gave us a little energy for the rest of the game.”

The Capitals are coming off an unsettling off-season in which Todd Reirden was fired after the Metropolitan Division-winning team was eliminated in five games by the New York Islanders in the first round of the playoffs. It marked Washington’s second first-round exit in two years under Reirden.

The Capitals hired Laviolette, who won a Stanley Cup in 2006 with Carolina and is coaching his fifth team. He ranks second in career wins among American-born NHL coaches, behind the Columbus Blue Jackets' John Tortorella (655).

“I think it was huge,” defenceman John Carlson said of winning the opener under Laviolette. “When we were playing bad, it was almost like we were resorting back to plays from the past and maybe trying to do too much. I think since he’s been here, we’ve simplified a lot.”

John Carlson and Nicklas Backstrom had a goal and assist each and Brenden Dillon also scored for the Capitals. Alex Ovechkin set up the first two goals.

Ilya Samsonov stopped 22 shots in his first game as the Capitals’ starter following Braden Holtby’s off-season departure. Samsonov snapped an 0-4-1 skid to win his first game since a 25-save outing in a 5-3 victory at Ottawa on Jan. 31.

Staal did not return after being struck in the head by Washington’s Nic Dowd midway through the third period. Dowd was issued a two-minute minor penalty. Coach Ralph Krueger said Staal is day to day.

Buffalo dropped to 1-6-1 in its past eight season-opening games, and came out flat for two periods against Washington.

“It seemed like we were playing catchup all night, which is a tough way to play against any team,” Hall said.

“We were behind the eight-ball kind of from the start of the game and we weren’t able to get out in front of things,” he added. “I think you take solace in the fact that we were able to come back and make it close.”

The teams closed last regular season with Buffalo beating Washington in a 3-2 shootout on March 9, three days before the NHL paused play because of the coronavirus pandemic.

The Sabres finished less than a winning percentage point shy of advancing to the expanded playoffs, stretching their post-season drought to nine years, one short of the NHL’s longest streak.

With no fans allowed, the Sabres filmed local front-line coronavirus pandemic workers to introduce the team’s opening-night lineup over the video scoreboard.

The teams meet again in Buffalo on Friday night.