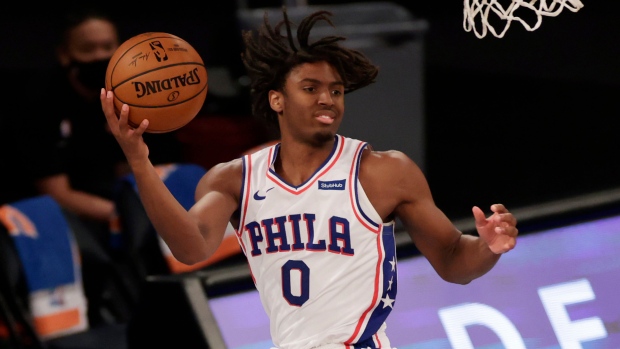 It's Monday, so that means it's time to get to work on the new fantasy week.

Week three of the NBA season was a mystifying experience. COVID-19 is creating a chaotic environment for the league, with player cases popping up, contact tracing ruling out many others and even causing games to be postponed.

It's important to remember that while we all try to navigate through these times, everyone's health is paramount.

The reality is this: Uncertainty is going to be the theme of this season, so all you can do as a fantasy owner is try to adapt and be as prepared as possible.

A player sitting out creates an opportunity for someone else, so why not try and take advantage of the circumstances?

I hope some of you were able to benefit from last week's article with Jordan Clarkson, Keldon Johnson and Joe Harris all now ranking in the top-75 in ESPN's player rater.

Here are five players I would take a look at this week.

*Note that I've indicated their rostered percentage in ESPN leagues in brackets.

There isn't a ton of tape on Philly's rookie, but he led the undermanned 76ers in a big way on Saturday with 39 points on 54 per cent shooting, seven rebounds, six assists, three threes and two steals in 39 impressive minutes against Denver. There's a good chance that performance caused fantasy general managers to scour for him on the waiver wire, especially in deeper leagues, but he's still only 26.3 per cent rostered. As long as the Sixers are missing even a few bodies, head coach Doc Rivers will give the first-round pick a chance to shine. There's no promise his shooting will remain efficient and he'll take care of the ball, but his minutes and volume will be there to produce counting stats. With five games this week (including tonight), he's a high-ceiling addition to your team.

Holiday has become the main benefactor of TJ Warren's extended absence in Indiana. He played 35 minutes a game last week, tossing up 15.3 PPG and 2.7 threes on highly attractive shooting numbers (53 per cent FG and 80 per cent FT). With the potential to chip in steals as well, Holiday is providing friendly numbers to his owners. Jeremy Lamb has been practising in full and he does represent competition for Holiday, but even if Lamb returns it’s hard to imagine him getting significant minutes right away. The Pacers play five times this week (including tonight) so grab Holiday and deploy him.

Burke is a roll of the dice, but the fact of the matter is the Mavericks are short on bodies. As of this writing, Josh Richardson, Jalen Brunson, Dorian Finney-Smith and Maxi Kleber are all on the shelf because of health and safety protocols. GMs in deeper leagues might want to see what he can do with this short-term opportunity. Burke hit seven threes and had 29 points in the Mavericks' win over the Magic on Saturday. Bottom line, Dallas needs offence and creation - skills that Burke provides.

The Montreal native is earning head coach Steve Clifford's trust and is seeing his minutes steadily increase toward the mid-20's. Birch's real-life appeal gives me confidence in his ability to keep earning playing time. He has the third-best net rating on the team (+2.4) and is outplaying his competition in Mo Bamba. Birch is never going to give you monster statistical nights, but there is value in his steadiness as he flirts with top-100 value in nine-category leagues. Over the past week, he's averaging nearly a double-double on fantastic percentages (72 per cent FG and 88 per cent FT). Add in over a steal every night and an occasional block, and you have an efficient player to put in your lineup. Birch has four games this week (including tonight).

Thomas Bryant's season-ending ACL tear is going to create minutes for someone else on the Wizards. The two primary options for head coach Scott Brooks are Robin Lopez and Wagner. Lopez is what he is at this point - a plodding seven-footer with a limited offensive game, but one who offers better rim protection for the Wizards. My hunch is that Wagner will become the more fantasy-friendly choice based on his past production. These are Wagner's per-36 minute career numbers: 16.9 points, 1.4 threes, 8.6 boards, 2.3 assists, 1.1 steals and 0.9 blocks on 49 per cent shooting and 81 per cent from the stripe. Lopez simply doesn't offer that kind of upside, but we'll see how this position battle shakes out.