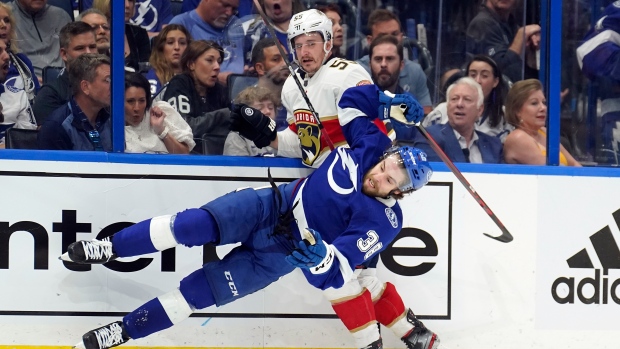 The NHL's Department of Player Safety has fined Tampa Bay Lightning forward Brandon Hagel $3,750, the maximum allowable under the CBA, for boarding Eetu Luostarinen of the Florida Panthers.

Tampa Bay’s Brandon Hagel has been fined $3,750, the maximum allowable under the CBA, for Boarding Florida’s Eetu Luostarinen.

At 15:27 of the first period, Hagel crosschecked Luostarinen into the end boards. The officials originally gave Hagel a five-minute major penalty for crosschecking before downgrading it to a two-minute minor penalty.

Acquired from the Chicago Blackhawks along with two fourth-round picks in exchange for two first-round picks as well as Taylor Raddysh and Boris Katchouk, Hagel has one goal and three assists in 10 postseason games this year.

The Lightning have a 3-0 series lead over the Panthers and have a chance to sweep the series Monday night.