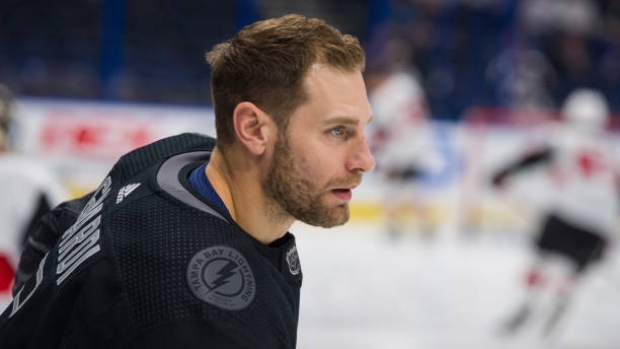 Former New York Rangers and Tampa Bay Lightning defenceman Dan Girardi has announced his retirement after 13 seasons in the NHL.

The 35-year-old had four goals and 16 points in 62 games with the Lightning last season, his second with the team. He appeared in all four of the team's playoff games, but failed to post a point.

The Welland, Ont., native was a free agent this summer and was unsigned prior to Friday's announcement.

Undrafted to begin his NHL career, Girardi broke into the NHL with the New York Rangers during the 2006-07 season and went on appear in 927 career games, posting 56 goals and 264 points. He spent 11 seasons with the Rangers before being bought out by the club in 2017 and subsequently signing with the Lightning.

"I would like to thank all my coaches, family, friends and teammates for supporting me throughout my entire hockey career," Girardi said. "I want to thank the New York Rangers for giving me a chance to fulfill my childhood dream of playing in the NHL. Throughout those 11 incredible years I have made so many friends on and off the ice. I bled Ranger blue and gave it my all for my team, the city and the Garden faithful. I also want to thank the Tampa Bay Lightning for helping me continue my career by giving me a chance to play for such an amazing organization, city and fan base. The last two years in Tampa Bay have been so much fun for me and my family. I will always fondly remember my time here. Finally, I want to thank my wife Pamela for always being there for me and holding down the fort and to Landon and Shaye for always being daddy's No. 1 fans.

"I gave my all every single night and left it all out on the ice. Now it's time for the next chapter of my life to begin and I couldn't be happier...and so is my body."

You were an absolute warrior on the ice and one of the best people in the game off of it, G.

You will always have fans and a home in Tampa. Congrats on an incredible career! ⚡️

Girardi was named to the NHL All-Star game as a member of the Rangers in 2012.