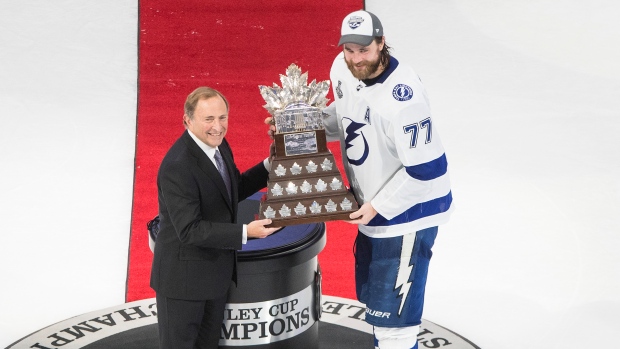 Tampa Bay Lightning defenceman Victor Hedman is recipient of the Conn Smythe Trophy, awarded the most valuable player in the Stanley Cup Playoffs.

Hedman won the award, as voted by members of the Professional Hockey Writers' Association, after helping his team win the 2020 Stanley Cup with 10 goals and adding 12 assists in 25 playoff games.

Hedman — all six-foot-six of him — was the rock, filling the leadership void when Steven Stamkos went down in late February for core muscle surgery and then was re-injured before the playoffs began anew.

The 29-year-old Swede, in his 11th year in Tampa Bay, scored 10 goals, added 12 assists in the playoffs, ate up 26 minutes a night playing at even strength and on special teams, ignited the offence with seeing-eye tape-to-tape passes, and punished those who crossed his blue-line.

"This is the best moment of our hockey lives," Hedman told reporters just before the players popped and sprayed champagne in the visitors' locker room.

"Our kids (and) our grandkids, if they look at the Stanley Cup they're gonna see our names. You can't even imagine how proud you're going to feel."