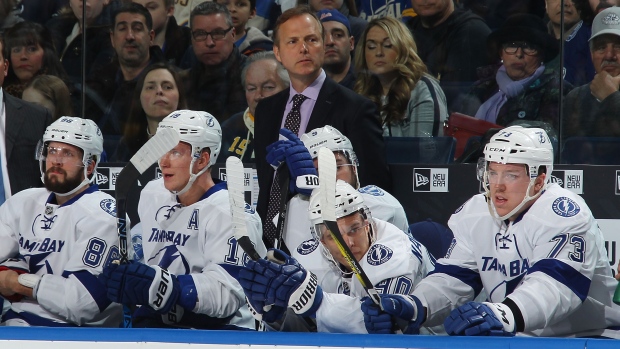 Tampa Bay Lightning general manager Julien BriseBois has refuted the idea that head coach Jon Cooper has been on the hot seat this season.

Speaking to TSN Hockey Insider Pierre LeBrun in an interview for The Athletic, BriseBois argued that despite the Lightning's regression to a 20-13-3 record, the team has only had one poor stretch of play this season.

"I think if you watch and if you follow our team from start to finish, it wouldn’t come up. It shouldn’t come up," BriseBois said of Cooper's job security. "We had a bad week in New York right before our trip to Sweden. We had three games in New York and didn’t play well in any of them. We won one but we played poorly in all three games. That’s our only really bad stretch of hockey we’ve had. And you’re going to have those during the course of a season.

"But, are we out there working hard and competing hard? The things that we set out to work on this year, they’re all trending in the right direction. I think Coop said a nice thing over the last couple of days, last year I think our record outperformed our play. This year our play has outperformed our record. Hopefully there’s going to be some sort of regression to the mean and our record is going to catch up to our play."

The Lightning posted an NHL-best 62-16-4 record last season before being swept in the first round of the playoffs by the Columbus Blue Jackets. This season, the Lightning have struggled to find that same success, but have won three straight games to now sit fourth in the Atlantic Division – one point back of the Florida Panthers for third with a game in hand.

Tampa Bay will face the Buffalo Sabres on Tuesday night.