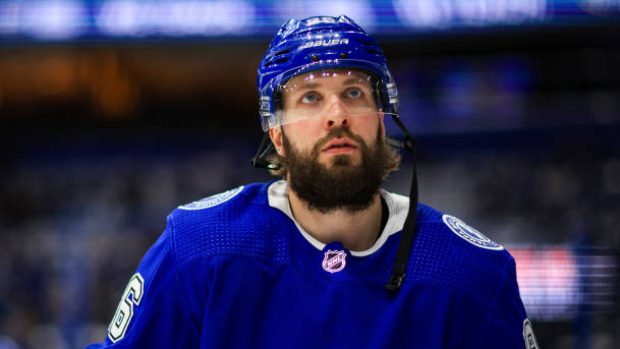 Tampa Bay Lightning star Nikita Kucherov exited his team's Game 6 overtime loss in the first period and did not return following a shift that included a cross-check from New York Islanders defenceman Scott Mayfield and an attempted hit on forward Mathew Barzal.

Kucherov is leading the playoffs in scoring with five goals and 22 assists for 27 points over 16 games after missing the entire regular season due to off-season hip surgery.

Lightning head coach Jon Cooper did not have an update on Kucherov post-game, but noted the team has plenty of experience playing without the star winger.

"We played 56 games without him," Cooper said. "Usually, we have 12 forwards when we play without him, so that probably made it tougher on us when we had 11. But we've gone down this path for four months. It's nothing new for us."

Lightning captain Steven Stamkos said the team missed Kucherov as they went 0-for-2 on the power play without him in Wednesday's 3-2 loss.

"There's no replacing 'Kuch,'" Stamkos said. "He's had an unbelievable playoffs for us. He's so lethal out there offensively, on the power play.

"Yeah, it [stinks] to lose Kuch like that early in the game. Guys battled. We played short the rest of the game and gave ourselves a chance to win. It didn't work out tonight, but it wasn't for lack of effort."

Game 7 will take place Friday in Tampa Bay with the winner advancing to the Stanley Cup Final to face either the Montreal Canadiens or Vegas Golden Knights.