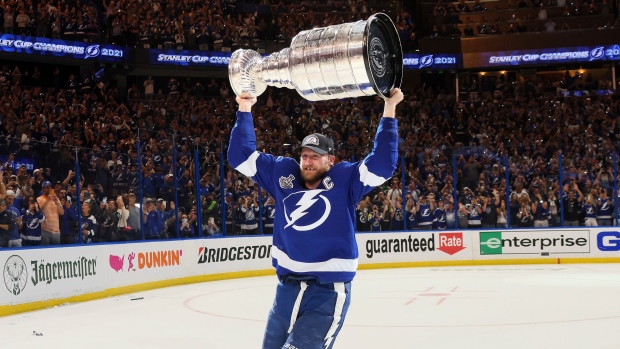 The Lightning, who were $18 million into long-term injured reserve cap space this season, are currently $3.5 million over the salary cap for next season, per CapFriendly, and expected to make cost-cutting moves this summer.

“I did not ask Stammer to waive his no-move clause for the purposes of the expansion draft,” BriseBois told LeBrun. “And I fully expect him to be in our lineup come opening night next fall.’’

Stamkos is signed through 2023-24 at a cap hit of $8.5 million. The 31-year-old posted 17 goals and 34 points in 38 games during the regular season, adding eight goals and 18 points in 23 playoff games as the Lightning repeated as Stanley Cup champions.

Stamkos is among 10 players of the Lightning who own some form trade protection, with Nikita Kucherov, Victor Hedman and Andrei Vasilevskiy also possessing no-move clauses in their contracts.

BriseBois told LeBrun he'd prefer to cut a deal with the Kraken to see a certain player selected but acknowledged the two sides may not be able to reach an agreement.

“Seattle is in the driver’s seat. They get to barter with 31 teams and shop one team against another,” BriseBois said. “And a lot of teams are probably trying to do similar things as we are. I think every team would like to work out a deal with Seattle where it’s win-win.

“But it’s probably going to be impossible for 30 deals to be cut here. I’d like to cut a deal with Seattle, but we may not be able to. At the end of the day, the way it’s set up process-wise is that we’ll submit a list and it’s very possible that Seattle will just claim a player and we’re going to move on with the rest of our reserve list.’’