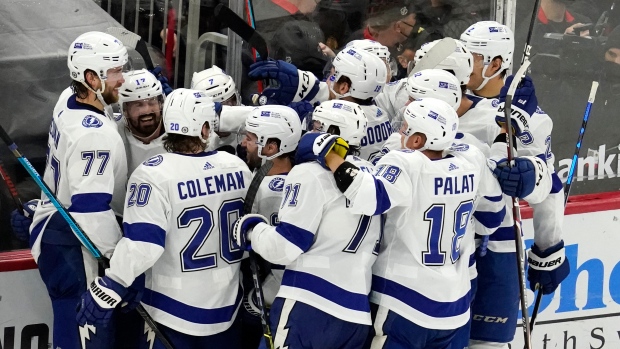 CHICAGO — Victor Hedman jumped on the ice and got the puck from Alex Killorn. He heard Tampa Bay's bench yell “Shoot,” so he flung the puck toward the net.

Right in the nick of time.

Killorn got a piece of Hedman's shot and the puck crossed the goal line right before the overtime horn, lifting the Lightning to a 3-2 victory over the Chicago Blackhawks on Thursday night.

Steven Stamkos and Anthony Cirelli also scored for Tampa Bay in its sixth consecutive victory, and Andrei Vasilevskiy made 35 saves in another stellar performance for the Stanley Cup champions.

“We're a resilient group,” Hedman said. “Like I said earlier, we want to win games and it doesn't matter how it looks.”

Killorn and Hedman were mobbed by their teammates behind Chicago's net when it was over. Killorn's fourth goal was upheld after a video review.

Chicago forward Alex DeBrincat had a shot go off the post in OT, and Tampa Bay defenceman Mikhail Sergachev shot one off the crossbar.

“It's frustrating for sure,” Blackhawks goaltender Kevin Lankinen said. “I think we played a really good game as a team. We showed we can play really well against top teams in this league.”

DeBrincat and Ryan Carpenter scored for the Blackhawks, who had won three of four. Lankinen finished with 31 saves.

The opener of the three-game series was the first meeting between the teams since Tampa Bay began its title defence with two wins over Chicago by a combined score of 10-3. The teams play again Friday night, and then finish the series on Sunday.

“There's a lot of positives and we'll take those with us,” Blackhawks coach Jeremy Colliton said. “We weren't quite ready to do what it takes the whole night.”

Tampa Bay was down 2-0 at the start of the third, but it erased the deficit in the first three minutes of the period.

First, Cirelli redirected Jan Rutta's shot past Lankinen for a short-handed goal at 1:04. Then Stamkos got his 11th of the season when he made a great move to get around Patrick Kane before scoring from the slot at 2:55.

While the Lightning controlled much of the third, Matthew Highmore had a wide-open look in front that was turned away by Vasilevskiy with about 5 1/2 minutes left.

“Give credit to the guys in the group,” Stamkos said. “We stuck with it. We kind of threw the negative thoughts out after the first two periods and went out and we played with some confidence.”

Chicago jumped in front in the second in perhaps its best period of the season. Vasilevskiy held off the Blackhawks for a while, turning away good looks by Pius Suter and DeBrincat, but some hustle by Brandon Hagel set up the first goal of the game.

With Chicago forward Phillipp Kurashev in the penalty box, Hagel chased down a loose puck in the Tampa Bay end and took a shot from the left circle that went off Vasilevskiy and popped into the air. Lightning forward Pat Maroon then mishandled the puck in front and Hagel passed it over to Carpenter, who beat Vasilevskiy high on the stick side at 7:24.

Carpenter's third goal in two games stopped Vasilevskiy's franchise-record shutout streak at 228 minutes, 9 seconds. It was the NHL's longest run since Ben Bishop's streak of 233 minutes, 4 seconds for Dallas during the 2018-19 season.

The Blackhawks continued to buzz around Vasilevskiy, and DeBrincat made it 2-0 when he got a piece of Kane's shot for his 12th goal with 5:56 left in the second.

Tampa Bay defenceman Erik Cernak was sidelined by an upper-body injury. He is day to day. Luke Schenn replaced Cernak in the lineup.

Chicago forward Dylan Strome got some work in on the ice before the morning skate. Strome has missed the last five games because of concussion protocol.

“He got out there, so that’s a positive. It means he’s progressing," Colliton said. "Certainly early in the game here.”