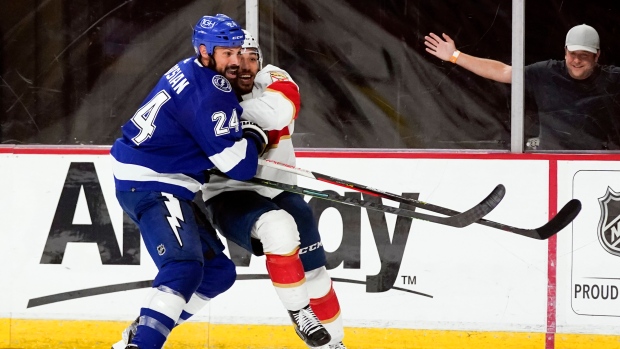 Tampa Bay Lightning defenceman Zach Bogosian will be out 4-6 weeks with a lower body injury, the team announced on Thursday.

Zach Bogosian is out 4-6 weeks with a lower-body injury team announces. Seems Andrej Sustr might be with Tampa Bay for an extended period. #GoBolts

Bogosian was hurt during the Lightning's opening-night loss to the Pittsburgh Penguins. He did not register a point in the game.

The veteran defenceman signed a three-year, $2.55 million contract with the Lightning in July. He skated in 45 games with the Toronto Maple Leafs last season, recording four assists. The 31-year-old was selected third overall by the Atlanta Thrashers in the 2008 NHL Draft. In 690 NHL games, Bogosian has scored 53 goals and added 147 assists.

The Lightning announced that defenceman Andrej Sustr has been recalled from the AHL's Syracuse Crunch to replace Bogosian on the roster.