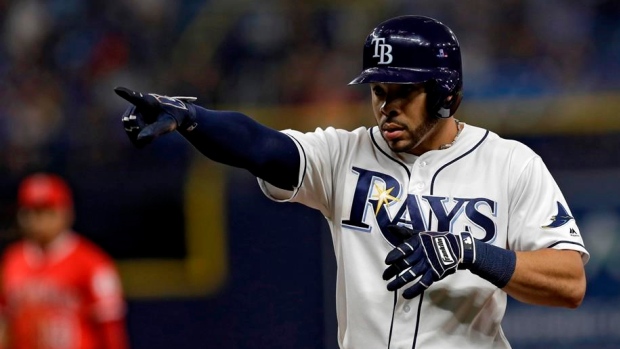 ST. PETERSBURG, Fla. — Blake Snell was upset with his performance but ecstatic over what his Tampa Bay teammates pulled off.

Tommy Pham hit a pair of RBI singles as the Rays suddenly broke loose, overcoming another subpar start by Snell and rallying past the Los Angeles Angels 9-4 on Friday night.

Held to one hit through five innings and trailing 4-0, the Rays scored five times in sixth and added four more runs in seventh. Pham singled home runs in both bursts.

The win lifted the Rays one-half game ahead of the New York Yankees atop the AL East.

Snell, who is 4-5 this season, lasted just 3 1/3 innings, giving up four runs, five hits and four walks during a 79-pitch outing.

"I had a lot of time to think about it, and I just didn't come a hundred per cent ready to go, more so on the mental side," Snell said. "Frustrating day."

It was the fourth time this year Snell failed to finish five innings. He did it four times in 31 starts last year.

Angels starter Andrew Heaney was pulled after Austin Meadows hit a leadoff double in the sixth. Reliever Luis Garcia gave up run-scoring singles to Yandy Diaz and pinch-hitter Kevin Kiermaier before being replaced by Ty Buttrey (4-3).

Buttrey hit Guillermo Heredia with pitch, allowed a two-run single to Avisail Garcia and an RBI single by Pham as the Rays went up 5-4.

Ji-Man Cho hit a two-run homer in the seventh as the Rays tagged Cody Allen and pulled away.

"Obviously the way it ended up is tough but that's a rarity for our bullpen. When they've been handed a lead, they've been awesome," Heaney said.

Albert Pujols hit a sacrifice fly and Cesar Puello had an RBI single to put the Angels up 2-0 in the first.

After Snell intentionally walked Mike Trout to load the bases with two outs in the second, Shohei Ohtani battled back from an 0-2 count to draw a walk to make it 3-0.

"Baseball games aren't scripted and sometimes the other team comes back and that's what they did," Angels manager Brad Ausmus said.

Ohtani, who hit for the cycle in Thursday night's 5-3 win over the Rays, went 1 for 4 with a walk and stole a base.

The announced crowd on Pride Night was 21,598. Tampa Bay entered with a home attendance average of 13,952.

Angels: 3B Tommy La Stella was scratched with left forearm tightness. ... OF Justin Upton (turf toe) could be back Monday.

Angels rookie LHP Jose Suarez (1-1) faces Rays RHP Charlie Morton (8-0) on Saturday. Morton may need to continue keeping Trout and Pujols in check to extend his 21-start unbeaten streak, dating to last Aug. 17. Trout (3 for 12, one homer) and Pujols (7 for 30) are hitting a combined .238 against him.

"Once in a generation kind of guy. I love the way he goes about his business, too. He just does his job as well as maybe anybody that has ever done it. To the point where he was even criticized a little bit for not being more 'that guy' but I love that. I think it's awesome that he's himself and just an awesome ballplayer." — Morton on Trout.