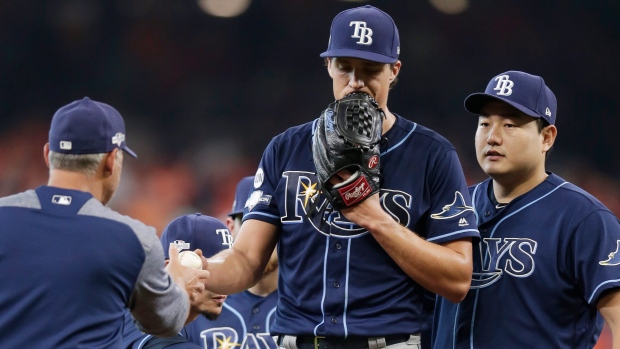 Tampa Bay Rays pitcher Tyler Glasnow admitted after Thursday's 6-1 loss in Game 5 of the ALDS that his pitches appeared to be recognized by the Houston Astros.

"I went back and looked, and it was pretty obvious," Glasnow said, per ESPN. "As far as the tips go."

The Astros opened Game 5 with four straight hits off Glasnow and finished with four runs and five hits in the bottom of the first inning. After the win, Astros third baseman Alex Bregman denied to picking up any hints off of the Rays starter.

"No, no, no," Bregman said. "He's as tough to face as anybody; I think if you went around and asked everybody on our team, it was just a team approach today. It was just one at-bat after another.

"The ball that Glasnow throws, that cutter, the four-seam cutter that he throws is unbelievable. His breaking ball goes from your head to your toes quick. So I feel like, with him, you just had to pick a pitch and try to put a pretty good swing on it."

Glasnow, who posted a 1.78 ERA in 12 regular-season starts, finished the postseason with a 7.71 ERA in two starts against the Astros. He said Thursday, though, that it was poor throws that cost him in the series, not the tipped pitches.

"I'm not going to say that was the reason why," Glasnow said. "I left some pitches that were there to hit over the middle of the plate. They are really good hitters. They can do things with [those].

"I don't care about how hard how you throw, they are good hitters. I don't know if that is what it was, but when I look back, it was pretty obvious."