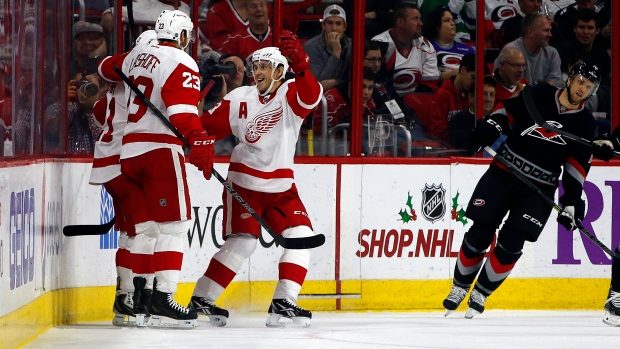 RALEIGH, N.C. - Tomas Tatar and Pavel Datsyuk have been very productive for the Detroit Red Wings whenever they've been able to play on the same line this season.

Tatar scored two goals and Datsyuk added a goal and two assists to lead the Red Wings to a 3-1 victory over the Carolina Hurricanes on Sunday.

The win came a day after coach Mike Babcock had got his 500th victory as an NHL head coach with a 3-2 comeback win over the New York Rangers.

Petr Mrazek made 34 saves for the Red Wings, who have won three in a row and seven of eight.

"Obviously Pav's line was really good tonight," Detroit coach Mike Babcock said. "They have speed and tenacity and the ability to score. All in all, they're a good line but we should have more good lines.

"(Carolina) had 34 legitimate shots — I thought Mraz did a great job in that they weren't coming off him or anything like that. I thought he was good. (Carolina coach Bill Peters) had his team ready to play. They were organized and played fast."

Jay McClement scored for Carolina, which has lost three of four, and Cam Ward stopped 19 shots.

It was Peters' first game against his former boss and mentor Babcock. Peters was an assistant to Babcock for three seasons in Detroit.

"We've got to be in the goalie's eyes and make it very tough for him," Peters said. "There are too many nights where we talk about we have shots but we don't have net front traffic. I thought the puck was coming off their guy a little bit. We've got to do a much better job of that."

Datsyuk beat Ward from the right circle at with 3:24 left in the first. Exactly 2 minutes later, Tatar scored from the left circle off a pass from Datsyuk, with his shot ricocheting off Andrej Sekera's skate and past Ward glove-side.

"It was a good win and we didn't have practice — I like it," said Datsyuk, who has 12 goals and 10 assists in 16 games this season. "There was some energy there. You always have more energy if you win. It's important that the team is sticking together. And (Mrazek) was great — he was a big reason we won today."

Tatar scored his 12th goal with 7:46 remaining in the second, beating Ward stick-side from the slot.

"I think we're playing well together right now," Tatar said of the line with Datsyuk and Darren Helm. "We're doing a good job and I hope we stay this way. I think Pavel is the best player I've ever seen. We all know what he can do. When he's healthy he's a big help for us."

Carolina got on the board at 17:11 of the second, with McClement redirecting Tim Gleason's blast from the right point.

The Hurricanes killed off a high-sticking double minor against Gleason early in the first period.

It was the first game for Carolina forward Andrej Nestrasil against his former team. Nestrasil made his NHL debut for Detroit on Oct. 9 and was picked up on waivers from the Red Wings on Nov. 20.