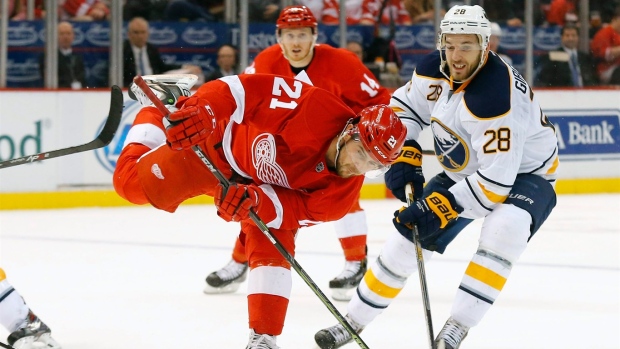 DETROIT - Tomas Tatar took advantage of extra space on the ice to create some scoring chances — and help Detroit end a six-game skid.

Tatar had a pair of power-play goals in the third period Tuesday night and the Red Wings beat the Buffalo Sabres 6-3 Tuesday night.

Tatar's 13th goal of the season gave the Red Wings the lead for good with 8:20 to play and Johan Franzen scored a few minutes later to pad the advantage for the hosts, who hadn't won since Dec. 7. Tatar's second goal came in the final minutes.

"We found a way to come back and score some goals," said Zetterberg, who also had an assist. "Christmas will be a lot nicer now."

Nicolas Deslauriers, Chris Stewart and Andre Benoit had goals for the banged-up Sabres, who were missing eight regulars due to injuries or illness. Michal Neuvirth returned from an illness and had 33 saves.

Buffalo took a 3-2 lead to the second intermission but all three third-period penalties ended with Detroit goals. The first came after Brian Flynn flicked the puck over the glass.

"Playing a good team, you have to play smart with a two-goal lead," coach Ted Nolan said. "We took a stupid penalty and the rest is history."

Buffalo got the game's first goal 2:36 in when Drew Stafford's shot struck Deslauriers' upper body and ricocheted past Mrazek.

Officials reviewed the play before calling it a goal.

Detroit's Weiss, who returned Tuesday after missing four games with a shoulder injury, evened it with a power-play goal midway through the first period.

Stewart's tally later in the first sent the Sabres to the break with a 2-1 lead.

Buffalo took a 3-1 lead halfway through the second when Benoit scored his first goal of the season on a short-handed breakaway that began with a blocked shot near the Sabres' blue line.

The rout was on a few minutes later.

The offensive output — Detroit's best this season — was especially satisfying after the Red Wings managed one or no goals in five of the six games during the skid.

Coach Mike Babcock said he knew the scoring would come.

"These streaks happen," he said. "You like to think they're never going to happen and you try to do everything you can but sometimes the puck just doesn't go in the net.

"These chances we had tonight; we had the same chances the last game except they didn't go in the net," he said.

NOTES: Red Wings defenceman Niklas Kronwall left the game with an upper body injury and did not return. Babcock was not certain if the injury was serious, but Kronwall left the arena in street clothes after the game and did not appear shaken. Weiss was helped off the ice in the third after taking a hard hit from Nikita Zadorov but said he expected to be ready to play when Detroit plays Saturday at Ottawa. . Detroit placed goalie Jimmy Howard (groin) on short-term injured reserve Tuesday. . The Sabres recalled forward Joel Armia from Rochester of the AHL and placed forward Marcus Foligno (hand) on injured reserve. Armia, who started Tuesday, is the fifth player Buffalo has recalled from its AHL affiliate since Saturday.