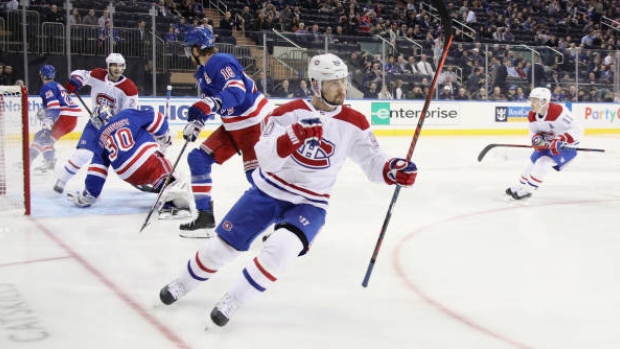 The prized acquisition of the Max Pacioretty trade was thought to be prospect centre Nick Suzuki. But right now, it’s another player from that deal who is helping move the needle in Montreal.

Tomas Tatar has had a fascinating career. Tatar was a reliable top-six scoring option for years in Detroit – a quality playmaker and goal scorer who fit in well on most speed-based lines. But in 2017-18, Tatar fell into a bit of a slump with the Red Wings. When Detroit prepared to gut their entire roster and enter a full-blown rebuild, they decided to ship him to Vegas for draft picks.

Tatar fit in Vegas like a square peg in a round hole. He was an ineffective attacker and never appeared to draw the confidence of head coach Gerard Gallant, who routinely made him a healthy scratch in the playoffs. For a guy making $5.3 million per year through 2020-21, it was a disastrous scenario for all involved. Not surprisingly, Vegas moved off of him this summer.

Vegas ended up paying a pretty penny for Tatar’s (limited) services – the Knights sent a first-round pick, second-round pick and a third-round pick to Detroit for a guy who ended up playing in just 31 games for their team during a Stanley Cup run. When they got off of Tatar’s contract in the Pacioretty trade, it looked as though Tatar’s inclusion was at least in part to make the salaries balance.

Now it’s looking like Vegas may have been burned twice by Tatar.

It’s too early to say which side ‘won’ the Pacioretty trade, but Tatar surely is making it interesting. Playing primarily with Brendan Gallagher and Phillip Danault in Montreal’s top six, Tatar has had a strong start to the season (five goals and eight assists in 15 games.) He’s one of the big reasons why the Canadiens are off to a hot start this season. 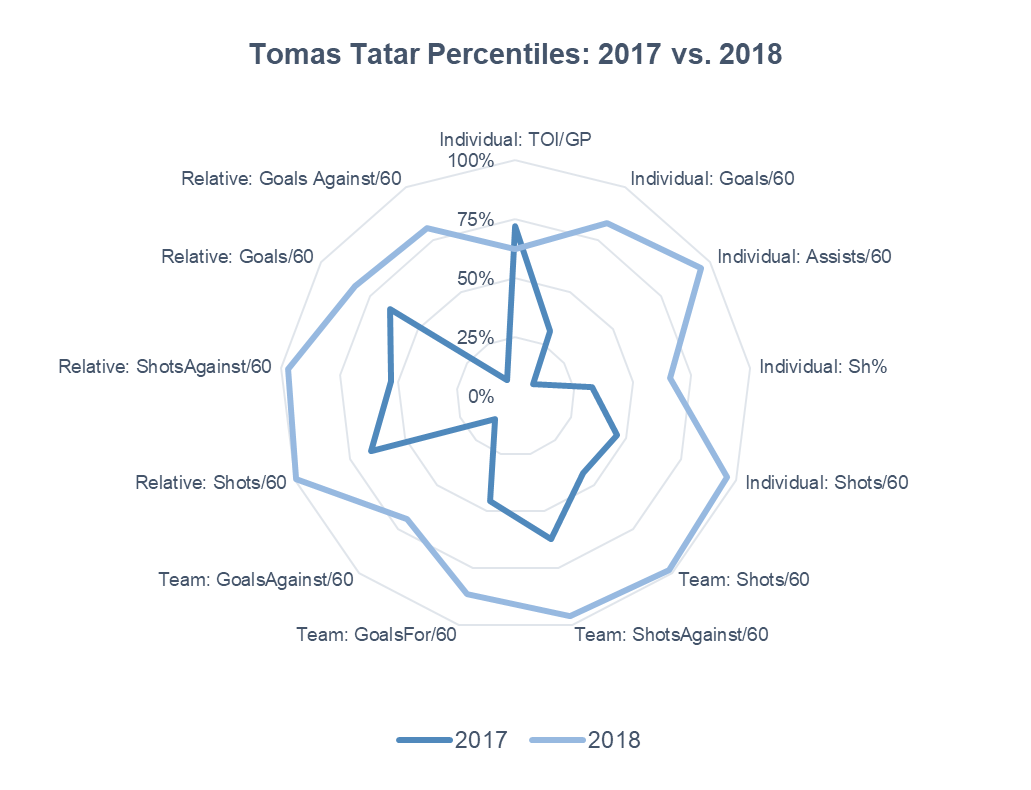 It’s an almost comical improvement. If anyone in Vegas says they thought the franchise was trading this type of player away, they’re lying.

The thing about Tatar’s start to the season is that it’s incredible from three separate angles. One, he’s been highly productive individually. His assist and shot-generation rates are in the 96th percentile league-wide. His goal rates are in the 83rd percentile league-wide. If you think about forwards in segments, a true ‘first-line’ forward will grade out by most measures in the 75th percentile or better. And individually, Tatar checks basically every single box.

Those numbers grade out better than virtually any non-Carolina based forward group in the league. And it’s translating to hugely favourable goal differentials – only 19 forwards in the league have a better plus-minus rating at 5-on-5 than Tatar (plus-6), and those include names like Pittsburgh’s Sidney Crosby (plus-7), Toronto’s John Tavares (plus-8), Nashville’s Filip Forsberg (plus-10), and Buffalo’s Jeff Skinner (plus-13).

Now, some of this is impacted by quality of teammate. Gallagher has been underrated for some time, and there’s no doubt his skill set is complementing Tatar’s to some degree. But full marks to Tatar for turning it around. His contract could have easily become one that is passed around the league in trades to make salary work, as we may have already saw this past summer.

Now, he’s producing in a big way – to the point where you start to wonder if his contract is a bargain, not a liability.