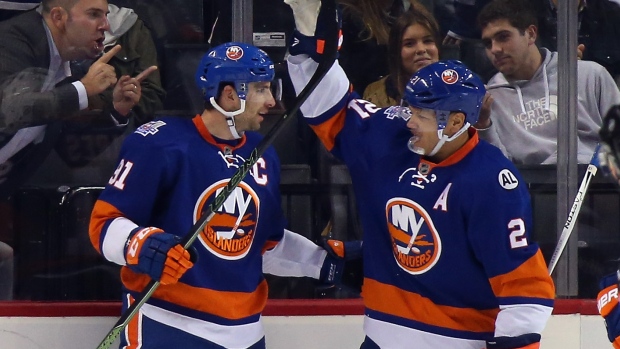 He was glad his team didn't show any rust or jet lag in their first game back in New York on Monday night.

John Tavares had two goals and an assist to lead the Islanders to a 5-2 victory over the Arizona Coyotes.

"I thought our guys were resilient tonight," Capuano said. "We played a good hockey team, and I thought we battled through it and had some legs under us."

Frans Nielsen, Brock Nelson and Steve Bernier also scored and Kyle Okposo had three assists — to increase his team-leading total to 12 — as the Islanders won for the third time in four games. Jaroslav Halak stopped 31 shots to help New York improve to 6-3-2 at home.

Martin Hanzal and Mikkel Boedker scored in the third period for Arizona, and Anders Lindback finished with 27 saves. Hanzal's score was just his third goal of the season but boosted his team-leading point total to 17.

Arizona fell to 0-2 on its four-game road trip and will look to avoid its first three-game losing streak of the season Thursday night in Montreal.

The Islanders won two of three on a three-game California trip last week, winning at San Jose last Tuesday and at Anaheim in the finale on Friday. After returning home Saturday morning, they did not have long to get back on Eastern time before returning to the ice Monday.

"Coming back from the west coast wasn't easy. I think if you ask most guys, they probably didn't feel their best," Tavares said. "But we battled through it and were strong mentally."

The Islanders took control early, generating the game's first seven shots, with Lindback stopping the first six. New York took the lead on the seventh when, just 25 seconds after Antoine Vermette was sent off for hooking, Tavares won a faceoff and took a pass from Okposo across the blue line.

Tavares carried the puck on his off-wing and flung a backhand cross-ice pass for Nielsen, who buried the puck into the vacant cage, making it 1-0.

"Just an incredible pass by Johnny," said Nielsen, referencing Tavares. "Nothing else really to say about it."

Arizona responded after the goal, posting nine of the game's next 12 shots, but Halak stopped them all. He also got some help from Nelson in the second period. After Halak stopped Connor Murphy's sharp-angle shot, the puck squirted to Coyotes forward Tobias Rieder, but Nelson blocked his chance with his right leg, keeping the Isles ahead.

The Islanders broke it open with three goals in the first 12 minutes of the third period, including tallies from Nelson and Tavares 4:15 apart.

"We battled hard for two periods," Lindback said, "and they got one early, which kind of set the tone for the third period."

Nelson took a pass at the top of the crease from Casey Cizikas and buried it into a vacant net, boosting the Isles' lead to two just 1:23 into the period. It was Nelson's fifth point, and third goal, in the last five games since he was moved to the team's top line with Tavares and Okposo.

Nelson and Okposo later set up Tavares' goal at 5:38. Bernier then redirected Johnny Boychuk's blast for his first goal with the Islanders to make it 4-0 with 8:10 remaining.

"Bernie just gets into those hard areas," Tavares said. "He gets to the front of the net, and it was good to see him get rewarded today."

Hanzal and Boedker scored 2:08 apart to pull Arizona to 4-2 with just over 2 minutes remaining.

"Jaro was great all night. It's unfortunate we couldn't keep the zero for him," Tavares said. "He was great, especially in the last 10 minutes when they kind of just started throwing everything at the net, and a couple seemed to find its way."

However, Tavares sealed the win with an empty-netter with 40 seconds to go.

NOTES: A rendition of the French national anthem was performed before the game to honour the victims of Friday's terrorist attacks in Paris. ... Vermette took three minor penalties in the game, and his six penalty minutes was his most in a game since Feb. 24, 2013. ... Tavares, whose bobblehead likeness was given to the fans in attendance Monday night, has recorded 11 of his team-leading 16 points in home games. His assist on Nielsen's goal snapped a two-game point skid in Brooklyn. ... New York Mets pitcher Noah Syndergaard attended the game.