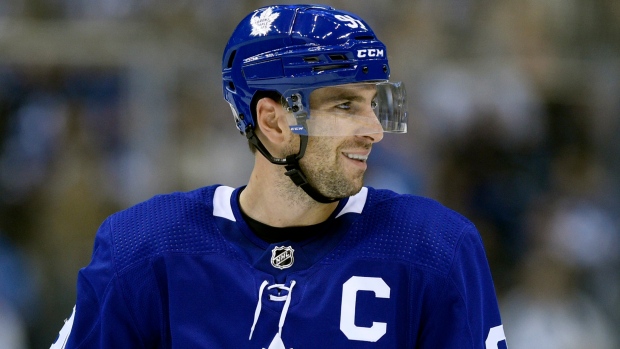 ​“My whole plan was just to come on here and pick Zdeno's brain on what he's been doing,” joked Tavares of the 43-year-old Bruins’ captain. “His longevity, what he's done fitness-wise around the league, just knowing how legendary it is. I've got a few dumbbells, kettlebells, a few [resistance] bands, and a [stationary] bike [at home], just trying to do the best I can.”

It’s no surprise the famously intense Tavares would be trolling for tips on how to stay ahead of the curve while isolating with his family and waiting out this unprecedented period of uncertainty.

The league had to abruptly halt its regular season back on March 12 in response to the COVID-19 pandemic, leaving fans and players alike wondering when and how hockey would resume. Could the league eventually pick up its regular season in the spring or summer, or would the NHL jump directly into playoffs ahead of crowning a Stanley Cup champion?

When the pause happened, Toronto was in a playoff spot, holding onto third place in the Atlantic Division and preparing to fight the Florida Panthers down the stretch to keep it that way. While Tavares misses being in the thick of battle, he knows answers to various burning questions about this season have to come in good time.

“We certainly miss playing in front of our fans and competing to play in the playoffs and [grabbing] the opportunity that we had in front of us,” Tavares said. “But more important is for everyone to stay safe and healthy and continue to follow all the recommendations from the experts…and understanding that we're all here to support each other, help each other and do the best we can to get this back to normal.”

For Tavares, that’s included staying in close communication with his teammates via frequent electronic check-ins. The 29-year-old admitted there has been some trash talk between teammates because the guys, “can’t leave it too long without giving it to one another,” but he demurred when asked which of those Leafs he’d least enjoy being quarantined with.

However, picking who he would like to be stuck in isolation with was pretty easy for Tavares.

“Probably Mitch [Marner] or Justin Holl,” he said. “The type of energy they bring, how much fun they have every day. They just bring that enthusiasm.”

In reality, Tavares is holed up with his wife and son, Jace, who was born during the Leafs’ training camp last September. The unexpected break and adherence to social distancing has afforded Tavares even more time with their new addition, and Jace has obliged by being the perfect quarantine companion while dad delves further into some hobbies.

“He's sleeping good at night, allowing us to rest, get our sleep, especially since we have the time for it now,” Tavares said. “On Netflix, [we watched] that Babies show, and it’s just interesting to compare it to what's going on with our little guy. But I haven't watched a ton of TV. I personally enjoy trying to cook a little bit and [this has] given me some time to do that. It's a good time to disconnect, relax and slowly build yourself back up as hopefully some positivity comes around the corner.”

If the NHL can start back up and continue its season, Tavares is aware there will be an adjustment period, and noted, “coming off any kind of break, it's not going to be a whole lot of fun chasing Dylan Larkin around the ice.”

He also revealed how Senators winger Tkachuk got him with a hit in Toronto’s first game of the year against Ottawa that “didn't make my ribs feel too great for a couple weeks, so thanks for that one.”

But a few bruises pale in comparison to the havoc COVID-19 is raging around the world, including in New York State, where Tavares lived for nine years as a member of the New York Islanders. Setting concerns about hockey aside, Tavares expressed again the importance of slowing the spread, so that sooner than later, life can go back to normal.

“I know a few people that are right in the fire of it and seeing how it's making the impact that it is in New York,” said Tavares. “I really hope everyone there is staying safe and following all the health recommendations, doing everything they can to stay healthy and help all the people that are on the front line. I wish all the best for them and hope it can get better.”